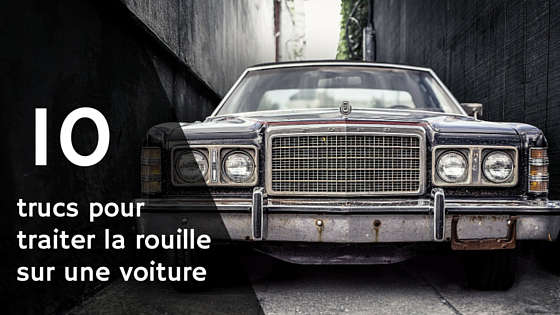 Watch out for rust on your car!

Rust is a real scourge that harms the value and aesthetics of our car! It is normal, but oh so undesirable!

Fortunately, it is still possible to prevent and treat rust on a car. Here are 10 tips to help you in your fight against rust on your car.

The anti-corrosion electronic module sends a small electric current through the body of the car. Thus, the ion transfer will be blocked and will not cause oxidation on the surface of the car, on the metal. You will find several models and brands of anti-rust electronic modules online. You can ask your mechanic for more details on this product.

This is a method used based on lubricants which, using oil jets will protect your car against rust and corrosion.

Wait for spring before repairing the car

Spring is a good season to repair car damage caused by corrosion. With the increase in temperature, the expansion of the metal will be favored. Thus, the correction will be made in depth at the level of the metal. The rust will therefore be easier to remove from the bodywork.

Protect your car from different temperatures

Cold and heat are also two factors linked to the appearance of rust on the body of a car. This is why keeping the car in a garage in the winter and leaving it in the shade in the summer could help counter any future rust that may appear. But be careful, if the garage remains very humid during the winter due to melting snow, for example, rust may quickly appear on the car.

An oxidation inhibitor against rust

If you have rust on your car, you can scrape off the paint and then put on an oxidation inhibitor. This will char the rusted area and promote its destruction. You will then only have to paint over it to remove all traces of rust.

To properly protect hard-to-reach places, you can drip bituminous wax. It will seal your bodywork while protecting it against rust. It is an excellent anti-rust treatment for the car before winter.

If a rust hole appears on your body, seal it with body filler to prevent the corrosion from spreading further. Wait for it to get hard and then you can sand it down and repaint the bodywork.

Before painting a car, simply immerse the car in an electromagnetic mixture and the latter will protect the vehicle against rust.

Several places specialize in anti-rust treatments for cars. It would be a very good way to protect and prevent rust on your car. Thus, you will be sure to keep your car in good condition for a long time. A car with no rust is much easier to sell than one with a lot of rust on the fenders.