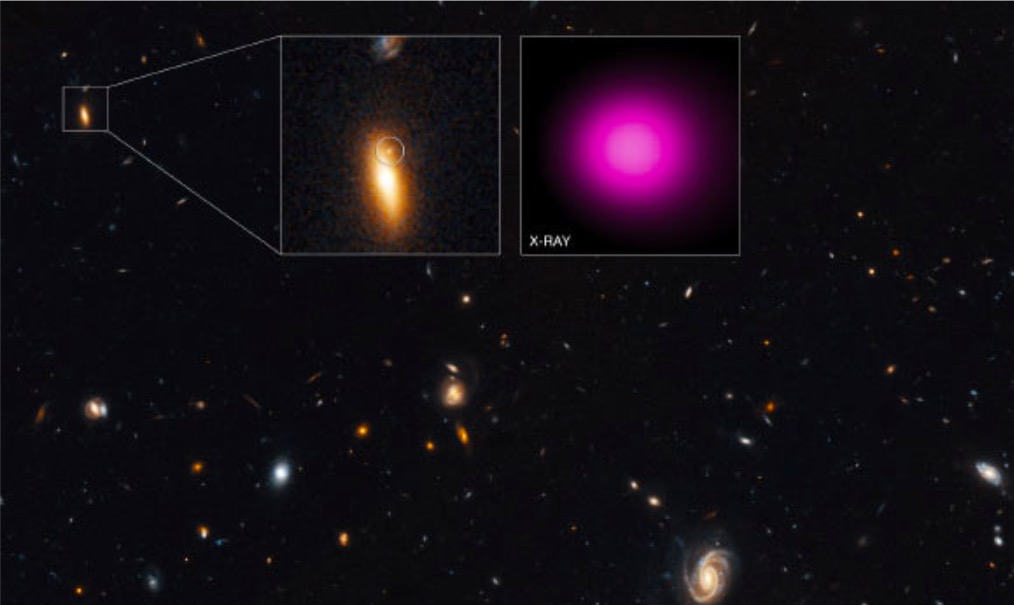 A team of researchers announces the detection of the most luminous black hole in the field of X-rays. Heavy with 100,000 solar masses, this nomadic ogre would move 4.5 billion light-years from the Milky Way.

The presence of black holes is usually betrayed by X-ray emissions from a disk of hot matter that forms when they accrete matter. Astrophysicists therefore rely on X-ray telescopes to study these space ogres. One of the most famous, Chandra, NASA’s X-ray telescope, has just discovered a particularly bright, but transient source of X-rays some to 4.5 billion light-years from Earth. Milky Way, right next to a lenticular galaxy called GJ1417+52.

The amount of energy released in this wavelength range and its characteristics can be easily explained if we are in the presence of a black hole accreting matter. Measurements suggest a mass of about 100,000 solar masses. A black hole of intermediate mass therefore, since supermassive black holes contain from a few million to a few billion solar masses.

The source of the black hole, baptized XJ1417+52, being transitory, and not being localized in GJ1417+52, it is probably about a wandering body formerly belonging to a dwarf galaxy passed too close to the lenticular galaxy which has been dismantled by tidal forces.

This cosmic monster is also remarkable in many ways, since the luminosity reached by XJ1417+52 exceeded by a factor of 10 that of the other wandering black holes detected to date. Moreover, this black hole moves at a distance 10 times further than that associated with the previous nomadic black hole which held the record. The peak in brightness, detected between 2000 and 2002, probably results, according to the researchers, from the explosive encounter of the black hole with a devoured star billions of years ago.