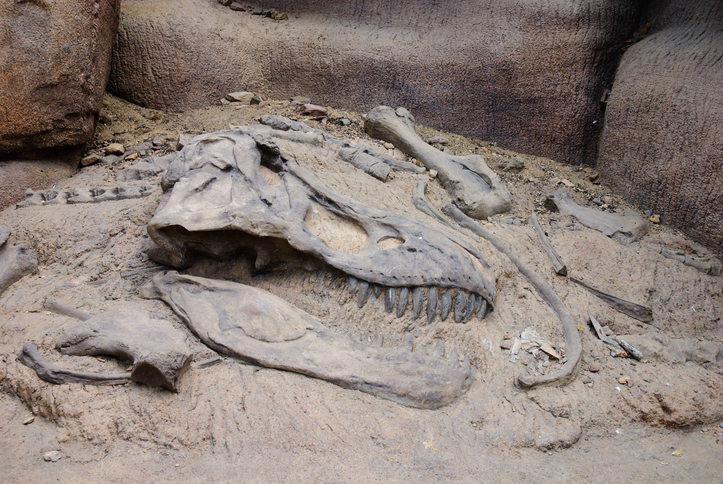 A team of paleontologists announces the incredible discovery of dinosaur protein remains dating back 195 million, shattering the previous record of more than 100 million years.

A fossilized Brachylophosaur canadensis femur a few weeks ago revealed what appeared to be the oldest remains of dinosaur collagen ever found. They had been estimated to be around 80 million years old. This record has already been shattered, since a group of paleontologists have detailed the discovery in the journal Nature Communication of type I collagen remains in 195 million year old dinosaur fossils. These traces were detected in a rib of a Lufengosaurus, whose remains were found in present-day southwest China (Sichuan and Yunnan).

» We have highlighted the presence of proteins preserved in a 195 million year old dinosaur, 120 million years earlier than other similar discoveries said Robert Reisz, a professor at the University of Toronto in Canada. The researchers announce that they have flushed out the proteins, collagen, inside tiny vascular channels of the rib of Lufengosaurus, a herbivorous dinosaur with a long neck which lived in China in the Lower Jurassic and which could measure up to ten meters in length.

The extraordinary discovery was made possible thanks in particular to infrared spectroscopy, a non-invasive technique which makes it possible to examine the chemical content of the bone without extracting the content and risking contamination. Our instruments are becoming more refined and should enable us to discover even older proteins:  » These proteins are the building blocks of soft tissues in animals, it’s exciting to understand how they were preserved explains Robert Reisz.

Thus, finding remains of collagen in such old fossils is nothing more than science fiction. These molecules could, for example, allow us to study the physiology and metabolism of these giants that disappeared millions of years ago.