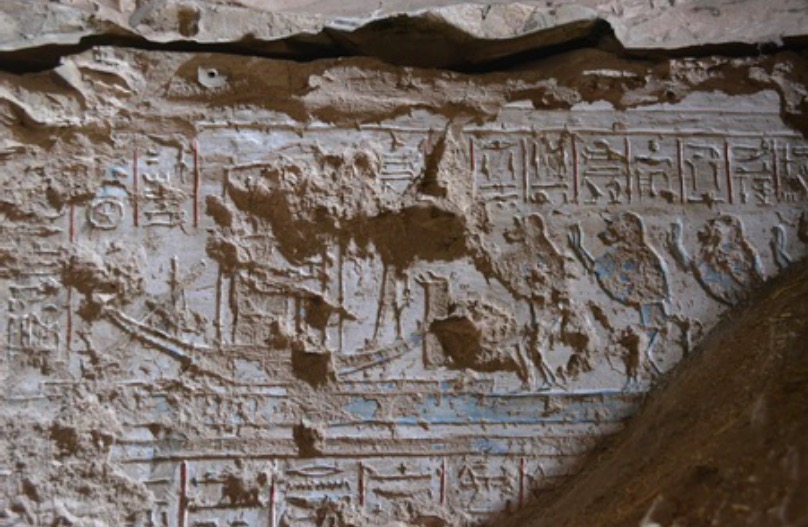 It was while working on another tomb that a team of Japanese archaeologists discovered that of a royal scribe, a senior official in Pharaonic Egypt, near Luxor. It is an approximately 3,200 year old tomb.

In the area of ​​El Khokha, on the western bank of the Nile in the necropolis of Thebes (near Luxor), a team of Japanese archaeologists led by Jiro Kondo, from Waseda University, discovered the tomb of a high official of Pharaonic Egypt. This is a discovery made by accident while they were working on another burial in the area.

The tomb discovered is that of Chonsou (or Khonsu), bearer of the title of royal scribe. The interior of the tomb is decorated with frescoes still in good condition, such as the engraving of the solar boat of the god Ra with four baboons in a praying position, arms raised, on the north wall of the tomb.  » On the eastern part, Chonsu and his consort are shown worshiping the gods Osiris and Isis. With in the background, a representation of two ram-headed deities, probably Khnum “, adds the press release published by the Japanese University.

To know if  » is that a good situation, scribe? “, Egyptologist Pascal Vernus, director of studies emeritus at the École Pratique des Hautes Etudes, gives the answer to Sciences & Avenir: “ In the New Kingdom (1550-1070), royal scribes were important figures « . More than private secretaries in the direct service of the pharaohs, the scribes were real people of trust for the latter.

The dating of this tomb probably dates back to the Ramesside period (1292-1069 BCE) “, explains Mahmoud Afifi, head of the department of Egyptian Antiquities to the daily al-Ahram.

The Japanese team will now try to go deeper into this tomb to find other wall ornaments, especially on the west wall. On those already visible, the Egyptologist Pascal Vernus was able to decipher one of the hieroglyphs associated with the name of Chonsou saying:  » I was a precise and just scribe « .