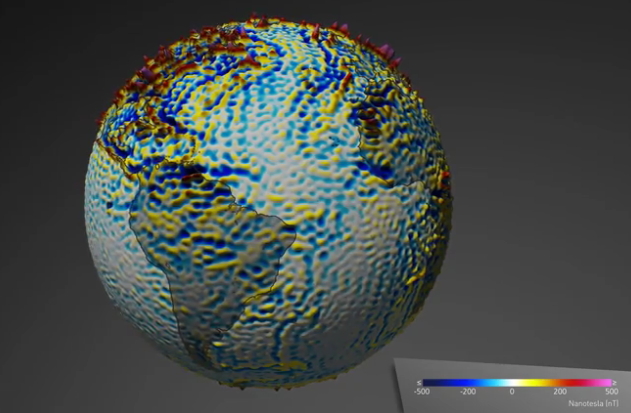 Do you live in a region of the globe where the Earth’s magnetic field is considered abnormal? To help you answer this question, the European Space Agency (ESA) has developed an exceptional 3D map.

The Earth’s magnetic field (or Earth’s shield) is an essential phenomenon for life on our planet:

“Several natural or artificial phenomena add up and constitute the total magnetic field, which constantly varies according to the variations of the sources which generate it. A protective screen against high-energy particles from the cosmos, the magnetic field is strongly affected by space weather events, which can disrupt all terrestrial technological systems. Its study makes it possible to understand the structure and internal dynamics of the Earth as well as the phenomena that occur in the upper atmosphere and in space.a definition given by the Institut de Physique du Globe de Paris.

While most of the Earth’s magnetic field is powered by geodynamo, a process that occurs inside the planet through convective movements in the Earth’s core, the latter being 90% liquid iron, the Earth’s magnetic field is also supplied to a lesser extent by the magnetized rocks of the lithosphere (earth’s crust and upper mantle). Researchers estimate that a reversal in polarity occurs approximately every one million years and that this event would shape our lithosphere.

Although scientists are working to better understand the small contribution of the lithosphere to the Earth’s magnetic field, it is not an easy exercise since the geodynamo is the main source. The Swarm space mission launched in 2013 by the European Space Agency (ESA) and based on the three mini-satellites Alpha, Bravo and Charlie aims to find out more and detect magnetic anomalies in the rigid part of our planet. .

At the end of the article, you will be able to view a 3D map of the lithospheric magnetic field presented by the leaders of the Swarm mission during the fourth annual meeting of the Swarm Science Meeting which took place from March 20 to 24, 2017 in Banff (Canada).

On the map, the red areas are those where the intensity of the magnetic field is the strongest. The results mentioned stipulate that these areas in red are places richer in magnetic minerals than normal, which would have been made possible by ancient meteorite impacts.

So, do you live in one of these areas?