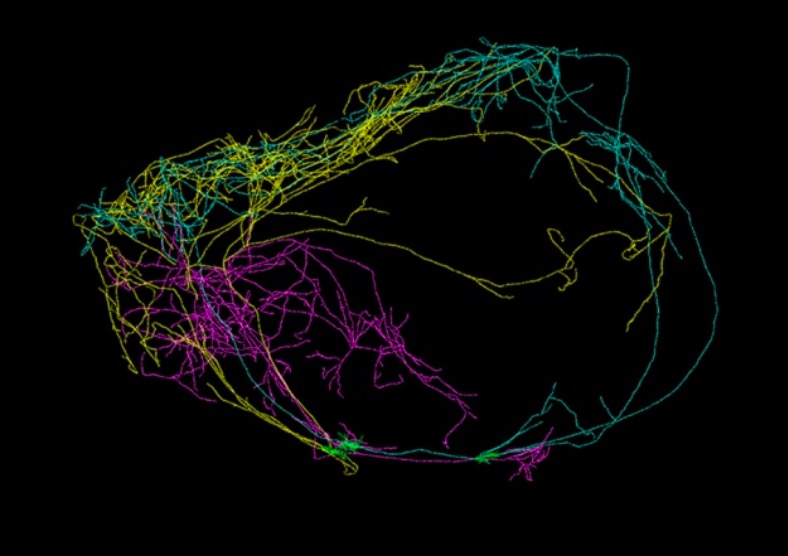 A team of researchers announces in the journal Nature that they have detected for the first time a giant neuron that encompasses the entire circumference of a mouse’s brain. A neuron so densely connected between the two hemispheres that it could finally explain the origins of consciousness.

The relationship between brain cells and consciousness is one of the least explored areas in neurophysiology, but some discoveries are nonetheless notable. In a statement reported a few days ago in the journal Nature, Prof. Christof Koch and his team at the Allen Institute in Maryland report the discovery of three giant neurons that span both hemispheres of the brain of a mouse, the largest wrapping around the circumference of the organ like a ‘crown of thorns’. Curiously, these three giant neurons all emanate from the claustrum, a thin strip of gray matter that may be the most connected structure to the entire brain, and constitute the seat of consciousness.

This relatively small region hides between the inner surface of the neocortex in the center of the brain, and communicates with almost all regions of the cortex to achieve many higher cognitive functions such as language, long-range planning, and advanced sensory tasks. such as vision and hearing. In 2014, a 54-year-old woman who suffered from epilepsy graciously allowed researchers to probe various regions of her brain with electrodes to narrow down the potential source of her seizures. By stimulating the cloister, they were then able to « turn on » or « turn off » his consciousness. This tiny hyper-connected region of the brain could therefore, according to several researchers, play an important role in the activation and deactivation of conscious thought. And these three new neurons all emanate from this same mysterious region of the brain.

The discovery of these neurons has long remained hidden due to rudimentary brain imaging techniques, but thanks to current techniques, Koch has developed a process capable of activating only the neurons present in the claustrum. By injecting a green fluorescent protein which then spreads throughout the neuron, the team was able to capture more than 10,000 cross-sectional images of the mouse brain. They then used a computer program to create a 3D reconstruction of the three neurons.

Keep in mind that just because these new giant neurons are connected to the claustrum does not necessarily mean that they could finally explain the origins of consciousness. It’s also important to note that these neurons have only been detected in mice so far, and the study has yet to be published in a peer-reviewed journal. Thus, we therefore need to wait for a confirmation. But the discovery nonetheless remains an intriguing piece of the puzzle that could help make sense of this crucial, yet enigmatic region of the brain, and how it might relate to the human experience of conscious thought.