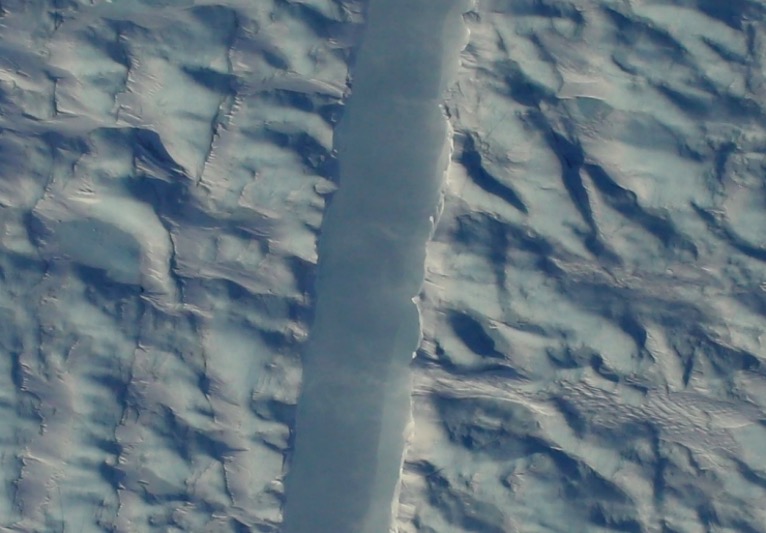 Operation IceBridge, an airborne mission led by NASA, has captured in recent days a disturbing and gigantic crack that crosses one of the largest glaciers in Greenland.

While examining satellite images, Stef Lhermitte, a professor at the Delft University of Technology in the Netherlands, had spotted something unusual in northwest Greenland. He transmitted the coordinates to NASA, which sent an airborne mission called Operation IceBridge to fly over the region for several days.

The first transmitted images report a significant crack crossing the Petermann Glacier (one of the largest glaciers in Greenland) at its center, which raises questions about how it formed. Also, this crack is not that far from another much wider and longer crack that slowly extends towards the center from one of the sidewalls of this glacier platform. If the two breaks were to cross, this could cause the appearance of a gigantic fragmentation and the detachment of an « island » according to the Washington Post.

Precedents have already taken place in 2010 and 2012 on the Petermann glacier with the detachment of two islands. The 2010 event was particularly significant with  » a giant ice island, four times the area of ​​Manhattan which had broken away from the glacier, as Edward J. Markey, chairman of the Committee on Energy Independence and Global Warming, said at the time. It was then the largest detachment of a block of ice for fifty years. Here, if a new island were to break away from the glacier, it could be more than twice the size of Manhattan.

For the moment, the researchers will study this fault and try to find the origin of this event which could modify the Petermann glacier forever, but also contribute greatly to the rise in sea level. According to the CNRS, the total melting of the Antarctic would be equivalent to a rise in sea level of the order of sixty meters to which should be added the melting of Greenland of the order of at least seven metres.