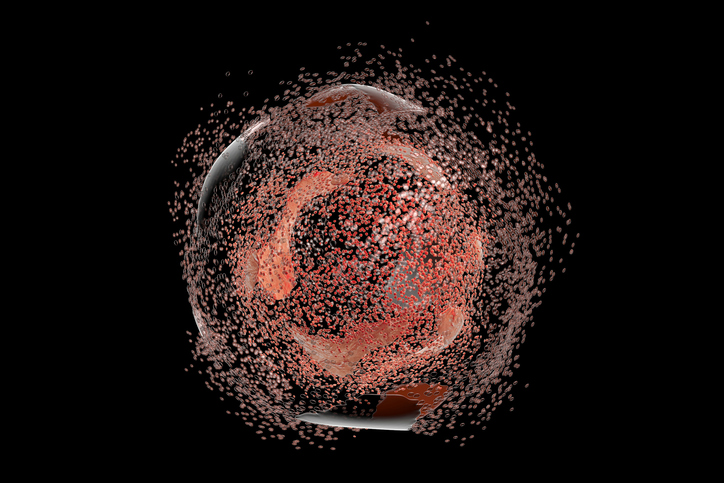 A team of researchers announces the discovery of a new method of targeted destruction of cancerous cells exploiting a natural cell suicide mechanism. A method that could be particularly effective against aggressive forms of the disease such as pancreatic cancer.

A newly discovered mechanism leads cancer cells to self-destruct, according to a new study. Once this new process is activated by modifying very specific proteins inside the cancerous tissue, the cell division leading to the disease is then stopped, leading to the death of the cancerous cells which can no longer spread in the body. And unlike current cancer treatments, which are very heavy and untargeted, this technique could spare healthy cells. So far, the effects have only been seen in mice. The next step will be to determine whether this mechanism can also work in humans.

» We had discovered as early as 2009 that molecules derived from phenanthrene (aromatic hydrocarbon called tricyclic) effectively kill breast cancer metastases that do not respond to traditional therapies. “, explains Malka Cohen-Armon of the Faculty of Medicine of the University of Tel Aviv, main author of this study published in the journal Oncotarget.  » We then examined the effect of these molecules on other types of malignant tumors resistant to treatment, such as ovarian cancer, colon cancer, pancreatic cancer, a rare form of brain cancer and of the lung, and found that these molecules succeeded in destroying them within 48 to 96 hours “, continues the researcher.  » At the same time, we found that the procedure causes no damage to healthy cells. « .

The researchers explain that they have examined the reaction to phenanthrene of all proteins in cells known to be associated with the process of cell division. They thus succeeded in identifying a certain number of specific proteins which underwent modifications under the influence of phenanthrene in the cancerous cells, whereas they did not react to it at all in the healthy cells.

» In a normal cell division process, the chromosomes of the parent cell reproduce in a precise fashion, with the two sets of chromosomes generated lining up opposite each other along a “pin”, explains the researcher. “The proteins we have identified are responsible for building the spindle and arranging the chromosomes during division. In cancer cells, phenanthrene disrupts their activity, resulting in the formation of a small, depleted and deformed spindle with scattered chromosomes. To avoid abnormal cell division, the cell will then ‘commit suicide’: a natural self-destruction mechanism, which is triggered in any cell that is not dividing normally”.

After examining this mechanism in cell cultures, the researchers tested it on laboratory mice. Tumor growth was then interrupted and two weeks later, the tumors of the treated mice were much smaller than those of the control group which remained without treatment.

“We believe we have identified a particularly effective new mechanism for cancer treatment that may be suitable for a variety of malignancies”, concludes the researcher. “We intend to develop molecules that interfere with the activity of the proteins we have identified, thus exploiting a natural self-destruction mechanism that intervenes in the event of abnormal cell division to destroy aggressive cancer cells. Subsequently, we will examine how to use these molecules as medicine for humans.”.