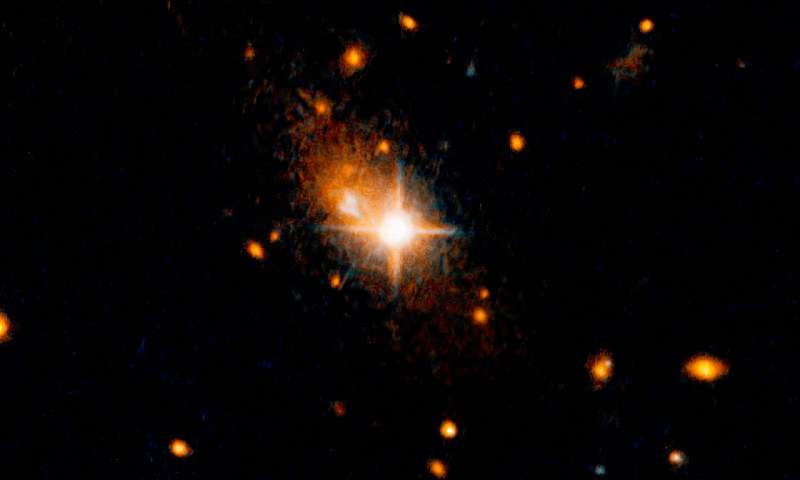 A team of researchers announces the discovery of a supermassive black hole dislodged from its galactic center by gravitational waves, those ripples in space-time predicted by Einstein more than a century ago.

The Universe is not peaceful. It is even very violent and events beyond belief are taking place. A few days ago, a team of astronomers detected a supermassive black hole with an estimated mass of around 1 billion suns that was simply dislodged, expelled from its galactic center about 8 billion light-years away. in the galaxy 3C186. The researchers estimate that it took an energy equivalent to around 100 million supernovae to expel the cosmic ogre from its lair. It is now done. Turned off like a mess at more than 7,600,000 km/h, it is now about 35,000 light-years away from the incident and we don’t know where it will end up.

Images captured by the Hubble Telescope do indeed reveal a bright quasar, the signature of an active supermassive black hole, but the quasar is far from its center. The event being unusual, the team of researchers led by Stefano Bianchi, from Tre Roma University in Italy, looked into the problem and you will find the full study in the review Astronomy & Astrophysics. It is indeed the first time that a black hole has been spotted so far from its galactic center. They believe today that a propulsive energy provided by gravitational waves was at work. And according to them, these gravitational waves would have been produced by the merger of two massive black holes at the center of the galaxy.

The researchers indeed suspect that this black hole was dislodged from its chair following the collision-merger of two galaxies which each contained a black hole in their center. This collision would have occurred between 1 and 2 billion years ago. The black holes then rotated around each other at the center of the new elliptical galaxy creating gravitational waves. These having neither the same mass nor the same size, the researchers therefore believe that the emission of gravitational waves was stronger in one direction. At the time of the merger, the anisotropic emission of gravitational waves would then have generated such a force that it would therefore have expelled the black hole, chasing it towards distant horizons.