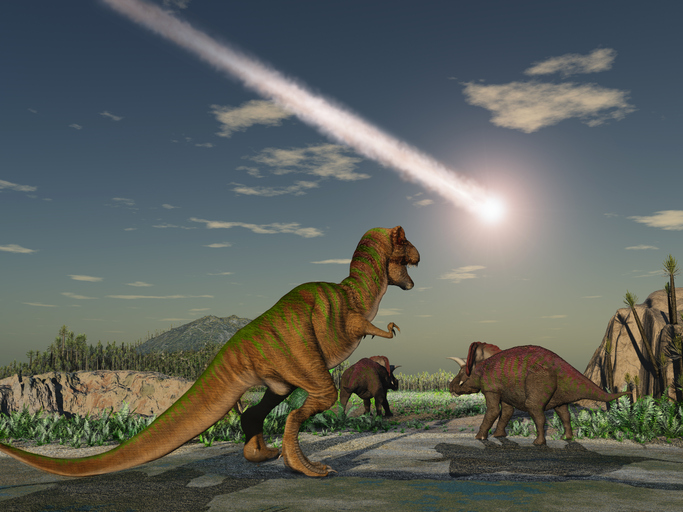 66 million years ago, an asteroid ten kilometers in diameter crashed into the Gulf of Mexico, causing the extinction of the dinosaurs. According to new research, it only took about 30,000 years for life to reappear at this site.

The largest mass extinction in the past 100 million years occurred 66 million years ago when an asteroid ten kilometers in diameter landed on Earth in what is now the Gulf of Mexico. It was the end of the long reign of the dinosaurs on Earth. Amazingly, it only took about 30,000 years for the planet to bounce back, according to new research.

A sample taken from the rim of the crater indeed reveals that even at the point of impact, life managed to rebound rapidly in close correspondence with the resurgence of life worldwide.  » Life returned to the crater very quickly “, declares Christopher Lowery, researcher at the University of Texas-Austin, during a press conference at the Lunar and Planetary Sciences Conference (LPSC), on March 21 and relayed by Space. “The core sample shows that life at the crater reappeared after about 30,000 years, around the same time as in other places on Earth “, he adds.

baptized Chicxulub, this impact crater is located in the tropical Gulf of Mexico, in the Yucatán Peninsula in Mexico. In addition to ending the reign of the dinosaurs, this impact also caused acid rain, wildfires everywhere on Earth and blew so much sulfur and rock into the air that solar radiation was blocked.

It was in 2016 that this mission of dating the resumption of life was started. From a vessel on the surface, the science team excavated a pillar-shaped sample about 800 meters which may have revealed the geological history of the area.

This mass extinction is the only one that has an external origin to the Earth. The others were caused by volcanic events or climatic changes. At the time of the asteroid impact, this almost immediately created a barren region 150 kilometers wide where no life could survive.  » Life was completely wiped out by the impact says Christopher Lowry. Due to the sudden nature and the external origin of the event, it was until then extremely difficult to assess how quickly life reappeared. As the researcher states, there was life on the seafloor within 30,000 years after the impact « . As for where this life came from, further research will be needed to determine.