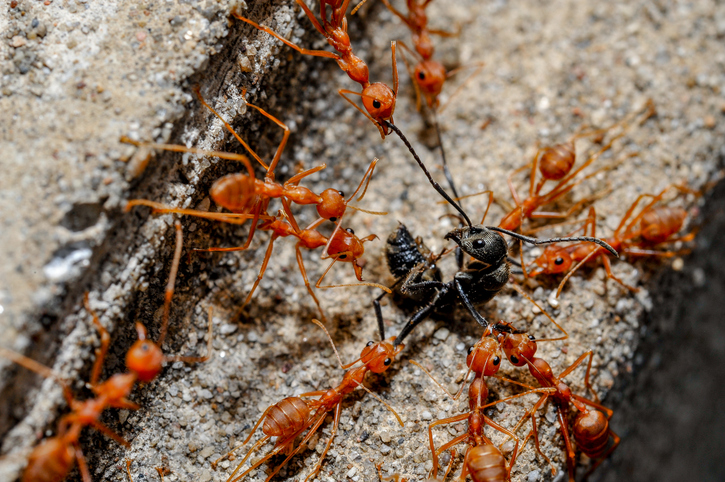 Ants are social insects, whose colonies are highly organized and whose collective strength is incredible. The perpetual war with termites proves it: ants are real warriors! Nevertheless, some examples show that they can sometimes show pacifism.

Termites and ants have an unfailing hatred for each other! We recently gave the example of Matabele ants from Africa who are responsible for deadly raids in termite mounds. They easily get rid of soldier termites and capture other termites unable to resist. Up to 500 Matebele ants can attack a termite mound! Incidentally, these ants have the specificity of helping their fellow wounded on the battlefield.

However, there are fairly poorly known situations in which ant nests would be built directly inside termite mounds. This type of strategy aims to protect themselves from other species of ants, however, this kind of calculated protection is more common among wasps.

The wasps Polistinae living in tropical areas are able to defend their colony with their main weapon: the sting. Wasps also exhibit behaviors adapted to the architecture of their habitat (bee-eaters). However, few wasp colonies can withstand an invasion of army ants which can climb trees and directly attack bee-eaters.

The wasps then found a parade: the alliance with other types of ants to protect themselves from the army ants which are the most formidable for them. To do this, the wasps must settle on a tree defended by the desired type of ant and find “protection”, subject to being able to defend themselves in the event of an attack, because these other ants are also dangerous!

There are therefore sometimes specific bee-eater-ant nest associations, as is the case with the wasp Polybia rejectaconsidered the most aggressive of the tropical zone of the American continent which installs its nest close (see in contact) with giant nests formed by the ant Azteca chartifex as evidenced by this study conducted in Brazil in 2013.