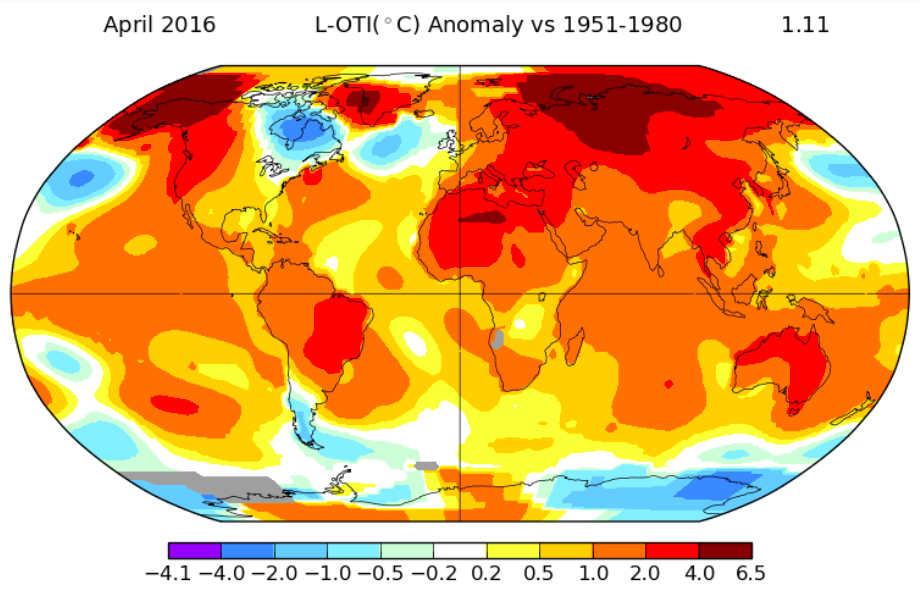 According to the latest report published this Saturday, May 14, 2016 by NASA, April 2016 was the hottest month of April ever recorded. This is the seventh month in a row in which average temperatures recorded have broken a record, a trend that is expected to continue.

A situation to which we are beginning to get used to, since for the seventh month in a row, April 2016 was the hottest on record, according to data published this Saturday, May 14 by NASA. Thus, in this month of April, the global temperature of the Earth and the oceans was higher by 1.1°C than the average for the months of April over the period 1951-1980. Seven months in a row of temperature records, but also the third month in a row during which the difference between recorded temperatures and the monthly average is greater than 1°C.

» It’s frightening. I don’t know what will happen next. We knew that the hot current El Nino (the weather phenomenon currently causing the drought in Venezuela) would influence the situation, but no one expected such a jump said meteorologist Eric Holthaus. According to him, this phenomenon of temperature records should last another four to six months. He also recalls that global temperatures have increased in the last 12 months by 25% compared to the total increase since the 1880s, which has a significant impact on the environment, for example a large part of the coral colonies. are bleaching due to ocean acidification and warmer water.

With these data, 2016 should, unless surprisingly, be the hottest year on record. In some parts of the world, this month of April has been excessively hotter. Indeed, in the Sahel, in Siberia, in the West of the United States or in the Middle East, the difference was very significant with an excess of 2.5°C compared to the usual averages. South Asia also saw all-time heat records.