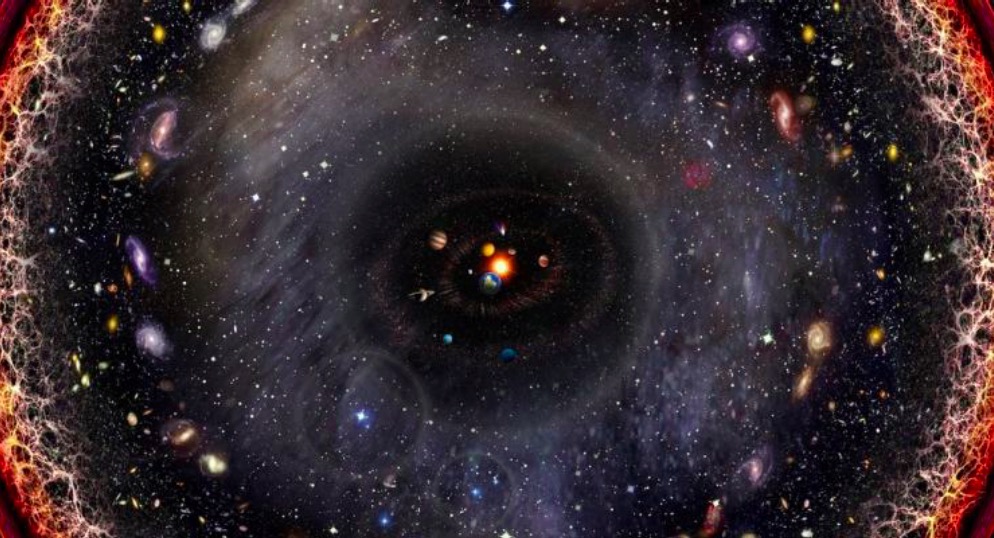 An artist tried to draw inspiration from NASA images to produce an image representing the Universe encircling our solar system. If this representation falsely places our system at the center of the Universe, it at least has the merit of being fascinating.

This image is the work of artist and musician Pablo Carlos Budassi who used research carried out by a team from Princeton University (New Jersey), more specifically logarithmic maps of the observable Universe. Based on human progress, this representation is therefore logically self-centered.

At the center therefore is our Solar System, then the internal and external planets, the Kuiper belt, the Oort cloud, Alpha Centauri, the arm of Perseus, the Milky Way, Andromeda and the nearby galaxies, the network of structures at large scale, the cosmic microwave background and finally, at the periphery, the invisible Big Bang plasma.

Astronomers J. Richard Gott and Mario Juric of Princeton University developed their logarithmic maps of the observable Universe by processing data from the Sloan Digital Sky Survey (SDSS). These have been collected over the past fifteen years by the optical telescope (2.5 m) of the Apache Point Observatory (New Mexico). These are the most detailed maps ever made by man.

According to the Indy 100 website, scientists estimate the age of the Universe at around 13.8 billion years and that during this time it was populated by billions of galaxies, the majority of which remain unknown to human beings. Thus, Pablo Carlos Budassi has created a representation of the Universe that truly makes anyone dizzy who dwells on it for too long. Indeed, each disc represents various fields of vision, from the closest to the farthest from our Sun.