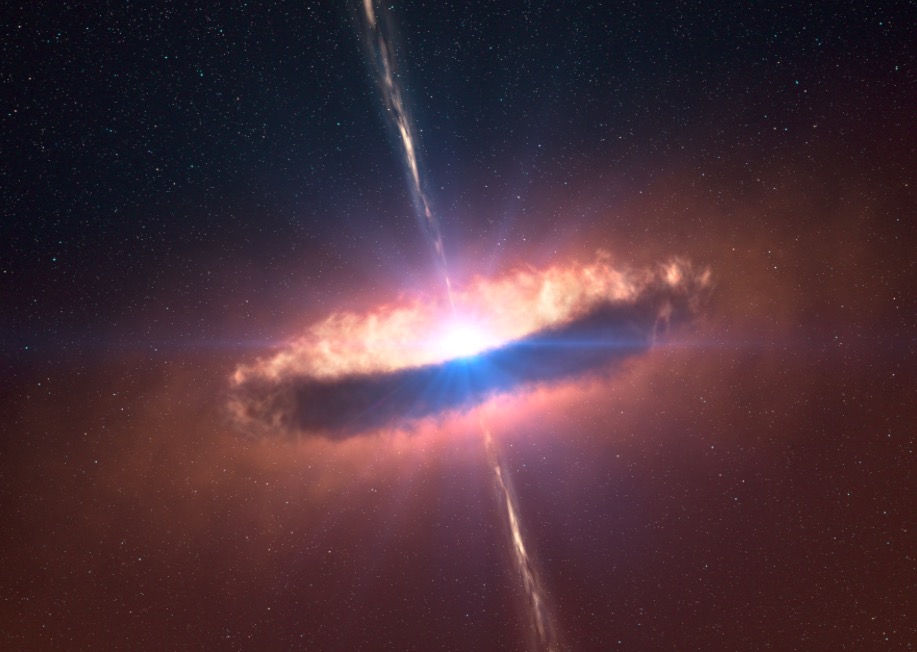 Astronomers have identified a massive young star located 1,000 light-years from Earth. The young shoot, whose mass is already 30 times greater than that of the Sun, could help us understand how the most massive stars in the Universe are formed.

The young star, future heavyweight of our Milky Way, is still in the process of collecting material from its parent molecular cloud, and promises to be even more massive when it reaches adulthood. The researchers, led by a team from the University of Cambridge, were able to identify the star at a key stage in its growth. They then found that these stars form in a similar way to many smaller stars, like our Sun – from a rotating disc of gas and dust.

In our galaxy, young massive stars – those with a mass at least eight times that of the Sun – are much more difficult to study than small stars. Indeed, they grow rapidly and die very young, which makes them rare among the 100 billion stars of the Milky Way, the observation window being very short.

« A medium star like our Sun forms over a few million years, whereas massive stars form over about 100,000 years, » said the Dr John ILEE, a researcher at the Cambridge Institute and lead author of the study. « These massive stars burn their fuel much faster, so they have a shorter overall lifespan, making them harder to observe as infants. »

Identified in a cold region of space, ideal for nurseries, the young star was surrounded by a thick opaque cloud of gas and dust. In fact, the star was only visible at sub-millimetre wavelengths. Conventional telescopes are not powerful enough to pierce such clouds, so researchers have used telescopes James Clerk Maxwell and Submillimeter Arrayboth located at the top of Mauna Kea in Hawaii, as well as at the telescope Karl G Jansky Very Large Array (VLA), located in New Mexico. They were then able to « see » through the cloud and get inside the stellar nursery.

By measuring the amount of radiation emitted by the cold dust near the star and using the unique fingerprints of various molecules in the gas, the researchers were able to determine the presence of a ‘Keplerian’ disk – which spins faster in the center than at its edge.

“This type of rotation is also observed in the solar system – the inner planets revolve around the Sun faster than the outer planets”, explains the researcher. “Finding such a disk around a young, massive star is exciting because it suggests that massive stars form similarly to low-mass stars, like our Sun.”

The next step for the researchers will be to observe this region of the sky with the Atacama Large Millimeter Array (ALMA), located in Chile. This powerful instrument will make it possible to identify any potential companions, and to learn more about this young heavyweight of our galaxy.