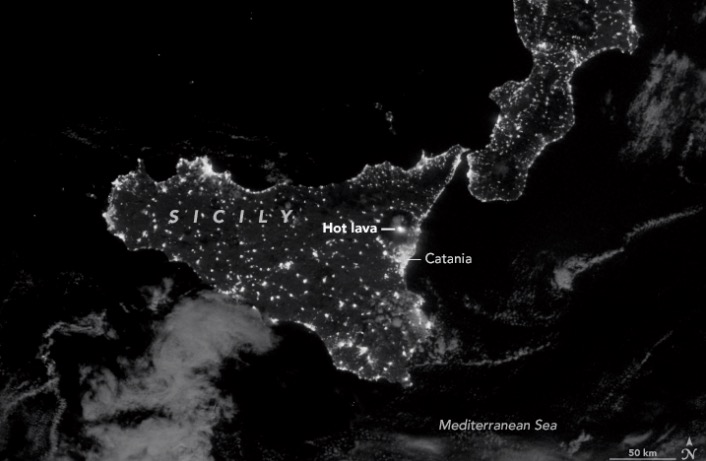 In a new satellite image recently released, Sicily is illuminated at night by the light of the cities that make it up, but also by the hot lake of Etna recently erupted.

A new image taken by an instrument installed on the Suomi NPP satellite offers us to admire the nocturnal glow of Sicily which sparkles with the light emitted by its cities. Only, one of the bright spots is not a city, but the Etna volcano which culminates at 3,350 meters and which recently erupted.

On Thursday March 16, 10 people were even injured by a hot rock explosion on Mount Etna, an incident that may have been captured by a film crew from the BBC. However, this level of activity is quite normal for Etna. Indeed, the highest active volcano in Europe is also one of the most active in the world with almost a hundred eruptions occurring during the 20th century. Active for at least half a million years, one of its eruptions at 425 BC. J.-C. was notably evoked by Virgil in the epic poem “The Aeneid”.

On the satellite image provided by NASA’s Earth Observatory, we can see the dangerous proximity of the city of Catania completely or partially destroyed several times by the regular eruptions of Etna, especially in 122 BC. AD, 40, 1169, 1185 or even in 1669. Since then, concrete blocks have been installed by US Navy helicopters to redirect the lava away from the city.

This image, captured by the Visible Infrared Imaging Radiometer Suite (VIIRS) instrument installed on the Suomi satellite, was taken on Thursday March 16 at 2:30 a.m. local time.

Here is the image in question: