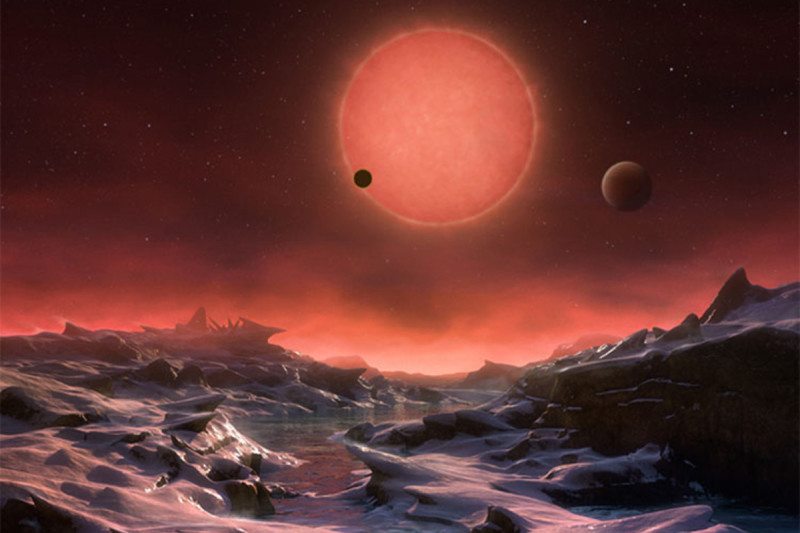 A few weeks ago, NASA announced the discovery of seven new planets orbiting a dwarf star only 39 light years away. Confined in a system now called TRAPPIST-1, these new planets appear rocky and with temperatures deemed « friendly » that could allow life to develop. But is it really possible? Obviously not and the star would be in question.

Red dwarfs represent 70 and 90% of the stars in our galaxy and are much smaller than our Sun, but they have the advantage of living much longer (their lifespan is measured in several hundreds of billions of years). Their long lives make these stars potential targets in the search for habitable worlds. But some of these stars are also known to be very unstable, in particular because of very intense magnetic fields. And according to recent analyses, the details of which will soon be published in the journal Astrophysical Journal, the star TRAPPIST-1 could indeed be a terrible host for its planets.

A team of researchers led by astronomer Krisztián Vida of the Konkoly Observatory in Hungary analyzed luminosity patterns of the first TRAPPIST-1 photometric data obtained by NASA’s Kepler Space Telescope K2 mission. The data reports an observation period spanning 80 days and suggests that TRAPPIST-1 emits flares too powerful and too frequent to allow life to form (let alone develop) on its planets.

In particular, the study identified 42 eruptions, five of which were so-called “multipoint” eruptions, which means that several bursts were recorded at one time. The most powerful eruption on record was as violent as the infamous Carrington Event of 1859 and considered to date the greatest solar storm known to mankind. If such an eruption occurred today, it would destroy all communication systems. Note also that the average time between each eruption was only 28 hours.

The Earth survived the Carrington Event, but remember that the planets of the TRAPPIST-1 system are closer to their star than the Earth is to the Sun. The authors of this analysis also emphasize that these are not isolated incidents in this system. These occur so frequently that they would destroy all stability in the atmosphere, making it extremely difficult for life to thrive. To give you an idea, models indeed suggest that it would take as much as 30,000 years for an atmosphere to recover from one of these eruptions.