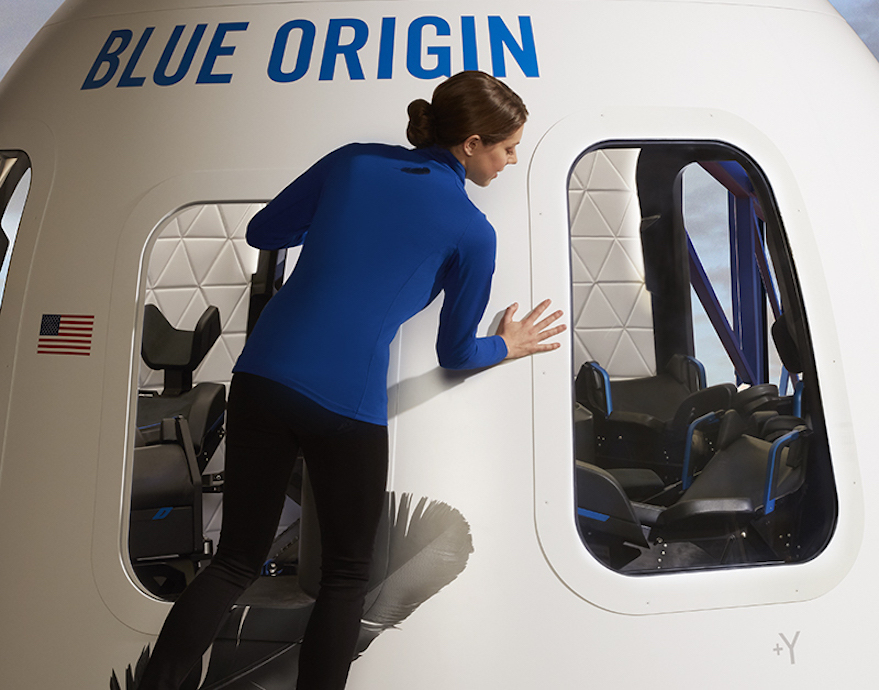 On Wednesday, March 29, 2017, Jeff Bezos (founder of Blue Origin) posted some images of what the experience inside the capsule that will take tourists to space in 2018 might look like.

It’s not just the race to Mars that drives private space companies, there’s also the sending of tourists into space. While SpaceX recently announced that it will send two tourists for a trip around the moon by the end of 2018, one of its main competitors, Blue Origin, has just unveiled the images of the interior of his space capsule.

In 2018, it will also send tourists for stays of about ten minutes in space. Obviously, the comfort of the lucky and affluent tourists has not been neglected with six reclining leather seats and giant portholes to make the most of the show.  » Each seat is next to a porthole, the largest portholes for a spacecraft says Jeff Bezos, CEO of Blue Origin and Amazon. As for the space tourists, they will wear blue and black space suits.

Blue Origin has yet to disclose pricing for this spaceflight, but it’s likely to be between $100,000 and $200,000 and commercial flights could begin as early as next year. During the ascent, passengers will experience acceleration forces of 3 G to 4 G and up to 5 G during the descent, although these forces will not last longer than ten seconds. (G for gravity, editor’s note). In the meantime, travelers will experience approximately three minutes of weightlessness.

» The New Shepard’s flight tests aim to show the performance and robustness of the system. But we also designed the inside of the capsule with particular attention to precision, safety and comfort. “, explains Jeff Bezos.

Like SpaceX’s Falcon 9 rocket, the New Shepard rocket is capable of landing back on Earth for reuse and will carry this capsule. It has already been successfully tested five times. However, no one was inside the capsule.