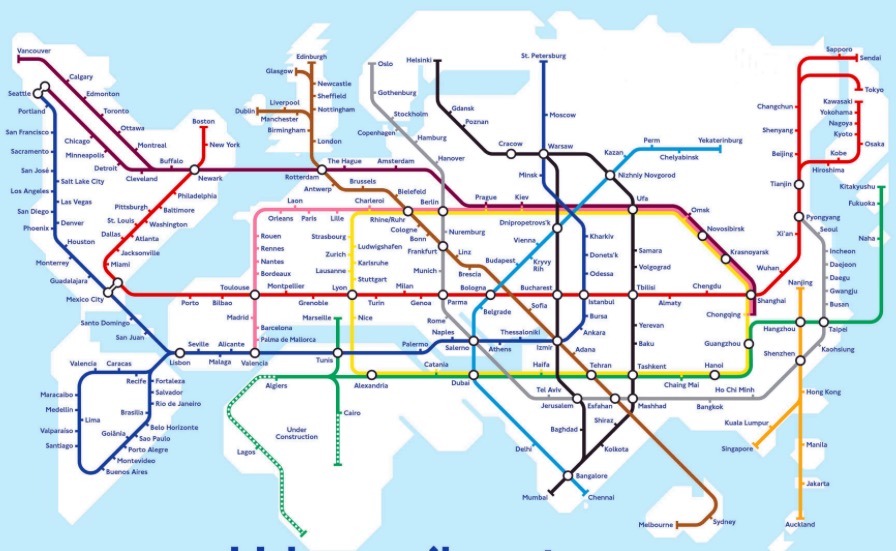 The Hyperloop imagined by Elon Musk could become the fifth transport standard on our planet. In the event that it really sees the light of day and becomes more democratic, a world map has been produced on the assumption that every major city (or almost) could be connected.

Launched in 2013 by Elon Musk, the Hyperloop project is still in the testing and development phase. This hypersonic train designed to move on rails by magnetic conduction should reach a maximum speed of 1200 km/h.

At this speed, travel times would be greatly reduced! Currently the most successful project is that of a line located in Eastern Europe linking the cities of Prague, Brno and Bratislava.

The map shown below dates from 2003 and is the work of Mark Ovenden. At that time, the Hyperloop project had not yet emerged. Indeed, this map is actually the hypothetical map of a world metro network in 2008. You should know that in 2003, almost every major city worthy of the name not having a metro, had a project planned to be effective precisely in 2008.

So, it is easy to replace the metro in our minds with the Hyperloop and thus imagine traveling the world at high speed. However, there is no doubt that there will be little chance of being able to make certain journeys in Hyperloop. Indeed, this would imply that the latter would pass through French Brittany, West Africa or even Scotland and Siberia! It is still possible to dream.

At the beginning of May 2016, a first test was successfully carried out, at a speed of 640 km/h. The Hyperloop should even eventually connect San Francisco to Los Angeles in just half an hour, starting in 2021. The company Hyperloop One is also behind in 2016 a fundraising of 80 million dollars in which the French National Railway Company (SNCF) also participated, showing its desire to be in the first position for an application in our country.

Remember that the Hyperloop could have an underwater version and that a competitor from South Korea recently arrived with a similar project: the Hyper Tube Express (HTX).