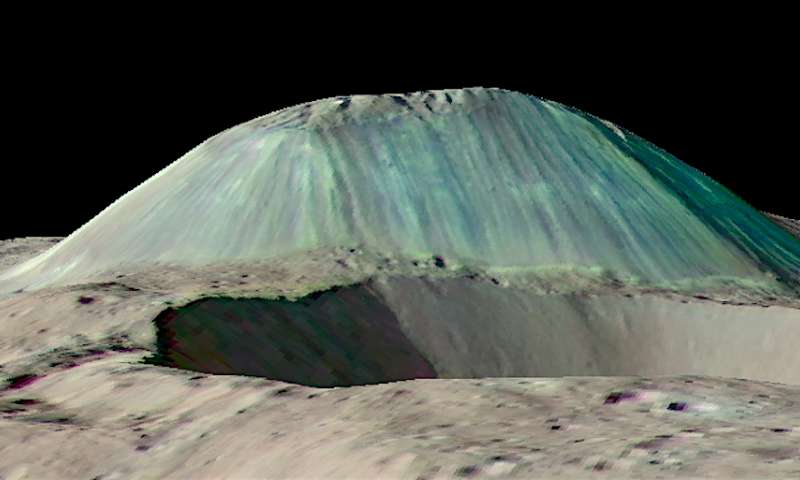 In the Solar System, Mont-Blanc has competition; on Ceres, this small ball 950 km in diameter which orbits between Mars and Jupiter, culminates Ahuna Mons, a gigantic ice volcano 4,000 meters above sea level, or half of Mount Everest.

Ceres is the smallest recognized dwarf planet in the Solar System as well as the largest main-belt asteroid. With a diameter of around 950 kilometres, there is little room for surprises. But never mind, the latest data returned by the probe dawnwhich orbits the planet, has some amazing news: Ahuna Mons, a 4,000 meter high mountain that stretches 17 kilometers at its base, is actually a cryovolcano – a volcano formed from ice, not rock.

This Ceres cryovolcano could be similar to those on Earth. Its shape is particularly similar to the volcanic dome of Mount St. Helens in Washington. Such volcanoes do not spit lava, but it seeps slowly on the surface. And it is this lava that will later form the dome. The researchers believe that Ahuna Mons formed by the same mechanism, but with ice rather than molten rock.

Because if Ceres has a cryovolcano, then this suggests that volatile ice flows slowly over its surface, but also into the depths. Mixed with large quantities of salts and ammonia, this water would then be sufficiently fluid to ooze on the surface of Ceres, whose temperatures are around -40 degrees Celsius.

This is not the first time that cryovolcanoes have been discovered in the Solar System. But the borders seemed until then more conducive to the appearance of these ice giants. We have indeed already detected it on Pluto as well as Triton, the moon of Neptune. The discovery of a cryovolcano in the asteroid belt between Mars and Jupiter thus represents a unique opportunity to study this rare geological process.