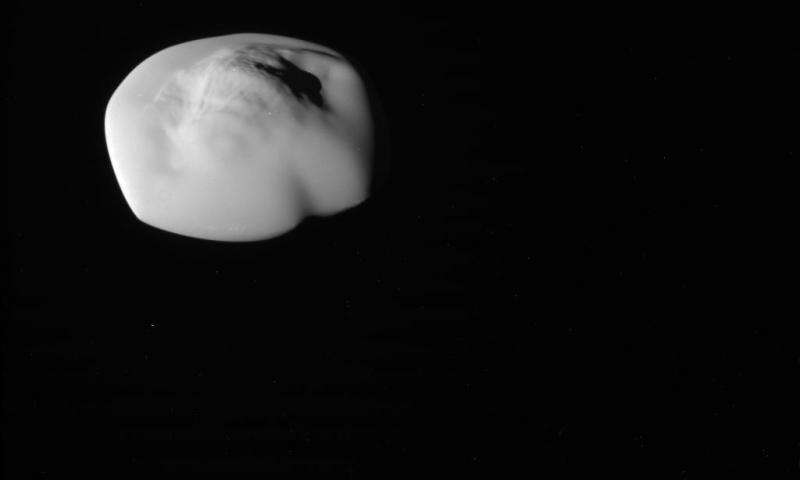 NASA revealed a few days ago that Enceladus, one of Saturn’s main moons, was likely to harbor microbial life forms. This discovery is to the credit of the Cassini probe which had « sniffed » the plumes of gas escaping from the icy crust of Enceladus revealing the presence of hydrogen in 2015. But Enceladus is not the only body examined by the probe. More recently, she photographed Atlas, a smaller moon.

Atlas is a small body about thirty kilometers in diameter discovered in 1980 thanks to photos from Voyager 1. First photos taken by Cassini in 2005 then revealed a small moon in the shape of a flying saucer with a wide equatorial ridge. Atlas also seemed to be the « shepherd » of Saturn’s A ring, the particles making up this ring are indeed subject to the gravitational effects of this small satellite. But just before its grand finale, Cassini had to shoot Atlas one last time. And the pictures are amazing.

Who would have thought twenty or thirty years ago that today we could contemplate the photos of a small moon which orbits several hundred million kilometers from the Earth? Our instruments allow it today and spoil researchers and enthusiasts. These raw, unprocessed photographs of Saturn’s moon Atlas were taken on April 12, 2017 by Cassini from about 11,000 kilometers away. These images, the closest ever taken to Atlas, will help characterize its shape and geology through Saturn’s orbits just in front of the A ring, the outermost of the gas giant’s luminous rings.

Decidedly, Cassini will have spoiled us with photos of the rings of Saturn passing through the shots captured of Mimas, Pan or even Titan, not to mention Enceladus. After more than a decade orbiting Saturn and its many moons, NASA’s Cassini spacecraft is preparing to plunge into the ringed planet’s upper atmosphere.

Cassini’s « grand finale » will involve a flyby of Saturn’s moon Titan on April 22 followed by 22 weekly dives through uncharted space between the giant planet and its majestic rings. Once those dives are complete, Cassini will end its days by plunging headfirst into Saturn’s upper atmosphere on September 15. It will then burn up like a meteorite transmitting data until its very end.