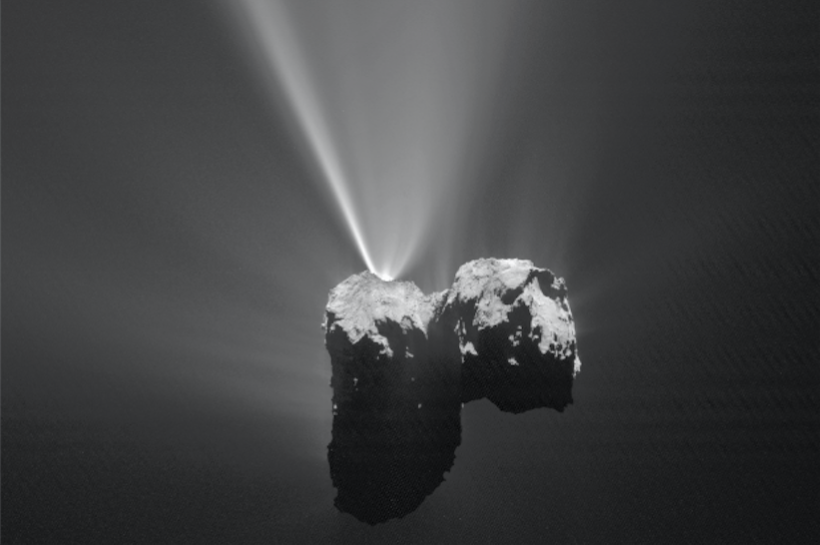 Last October, the Rosetta probe discovered oxygen on comet Tchouri. A study published in The Astrophysical Journal Letters today demonstrates that this oxygen is « older than the solar system, and comes from the interstellar medium ».

Comets are aggregates of small grains of ice formed in the protosolar nebula (the cloud of gas and particles that eventually gave rise to our solar system). Tchouri, aka comet 67P / Churyumov-Gerasimenko is a famous one. And for good reason, in October 2015, a team of researchers announced the news: There is an abundance of molecular oxygen (O2) in the hair of comet Tchouri. Today, a CNRS team led by Olivier Mousis, demonstrated that this oxygen was « older than the solar system and comes from the interstellar medium ». In a report published in the journal The Astrophysical Journal Letters, the researcher states:

“Oxygen would have been formed from water molecules broken by the bombardment of galactic cosmic rays when they were in the form of grains of ice located in the interstellar cloud which preceded the formation of the protosolar nebula. The oxygen molecules thus formed would have stabilized during their inclusion in the holes created in the water ice by the bombardment of galactic cosmic rays. These grains of ice would then have been transported to the outer parts of the protosolar nebula, and would have agglomerated to form comets.“.

Oxygen yes, but solid oxygen. Indeed, assuming that Tchouri still releases oxygen today when the ice that composes it melts under the effect of solar radiation, this means that the water of the comet has remained in its solid form since its formation. . If the ice had melted, the oxygen would have been released. From this fact, we can deduce that the temperature of the ice that makes up Tchouri never rose above 150°K (the sublimation temperature of water ice).

In the solar system, the smaller a body, the less it has evolved. As pointed out Olivier Mousis : “Comets therefore allow us to better understand the origin of the solar system, or even to know whether they participated in the appearance of life on Earth. »