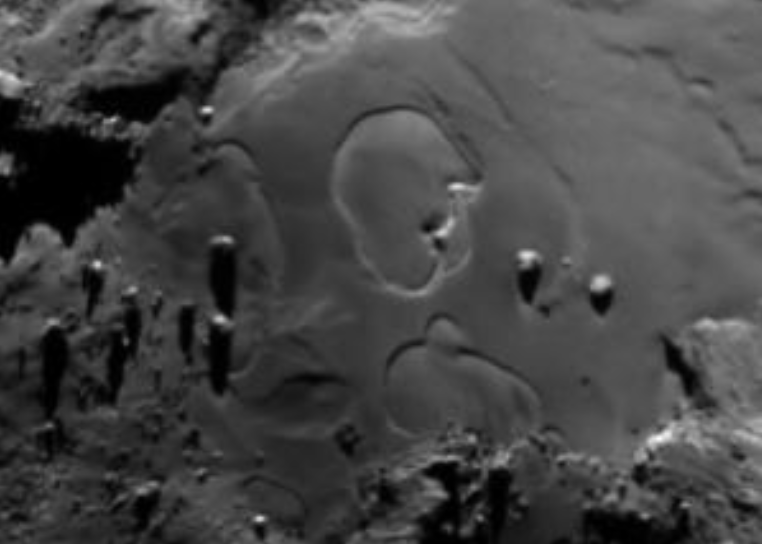 But what happens to the beautiful Tchouri ? For some time now, rapidly growing concentric structures have been observed on the comet, while it should pass in a few weeks as close as possible to the Sun.

This time no crop circle. However, the concentric structures are identical, they appeared in the Imhotep region of comet 67P/Tchourioumov-Guérassimenko, Tchouri for the intimate, zone close to the equator of the comet.

« One morning, we noticed that something new had happened: the surface of Imhotep had started to change dramatically, » says Olivier Groussin, from the Laboratoire d’Astrophysique de Marseille, co-signer of an article on the subject. in the journal Astronomy & Astrophysics. The pictures come from the Rosetta probe, in orbit since August 2014 around the comet. The OSIRIS camera observed the first circle on June 3. A second, then a third were then observed, the first two then measuring respectively on July 2, 220 and 140 meters in diameter.

“These changes happened very quickly with an expansion of the edges of a few tens of centimeters per hour. This highlights the complexity of the processes involved », this strange phenomenon is mainly due to the sublimation of the ice during contact with the sun’s rays (direct passage of a body from the solid state to the gaseous state, without pass through the liquid state).

It is recalled that the phenomenon is located on the equator of the comet, one of the parts most exposed to the Sun. « We will be able to reconstruct the origin of these curious characteristics » by combining the observations made by the OSIRIS camera and the data that the other Rosetta instruments will transmit, concludes Olivier.