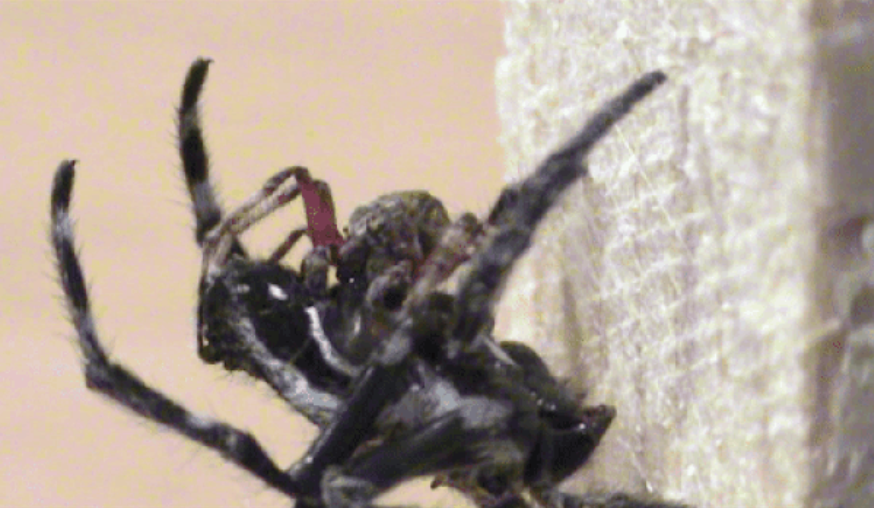 In general, spiders are famous for the violence of their sexual relations, often embellished with cannibalism, emasculation or even genital mutilation. However, one species of spider does not fit into this framework.

Sexual practices are very varied in human beings. However, researchers from the EZ Lab of the Institute of Biology of the Academy of Sciences and Arts of Slovenia assure that multiple sexual practices are observable in spiders. The results were published in the journal Nature on April 29, 2016.

More often than not, this can feel like a real fight. The male, 2 to 3 times smaller than the female, must activate to mate before being devoured by his partner. Reproduction is also complex: for the sperm of the male to fertilize the female, he must transfer drops containing his sperm, secreted by the epigastric fold under his belly, to his pedipalps at the front of his head. Then, the latter must deposit the sperm in the epigyne, the female’s reproductive organ.

Copulation is long and risky for the male since the approach can be stopped dead by the female, and this at any time, the latter then deciding to eat him before the end of the act. According to the researchers, some spiders, however, have developed sexual practices that promote mating.

Slovenian researchers have described the behavior of one spider in particular: Darwin’s black spider or Caerostris darwiniendemic to the island of Madagascar, known mainly for the manufacture of huge, very resistant webs.

This spider would therefore have developed other slightly milder options than cannibalism or emasculation, although it also knows them. For example, the male may attempt to mate with the female by approaching her by surprise. He can also attempt to block her by weaving a web around her to tie her up. More surprisingly, the male could practice oral sex before, during and after mating, this option allowing him to ensure his chances of mating and therefore of paternity. Indeed, by depositing saliva on the organ of the female, the male favors the fertilization of his sperm rather than that of a competitor.