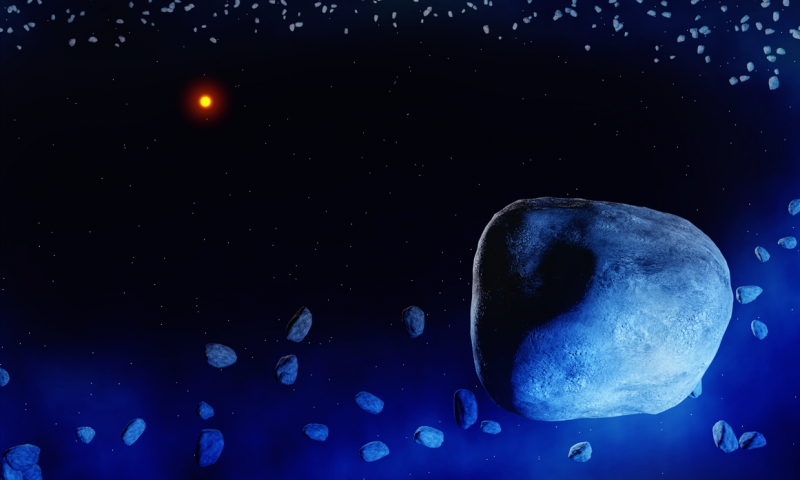 An international team of astronomers announces the discovery of comets orbiting a star resembling our Sun. What give us a glimpse of how our own solar system has developed.

Comets are essentially “dirty snowballs” made of ice and rock. Some, approaching their star, sport a pretty tail, made of gas and dust, which form a temporary atmosphere, the hair. Formed very early in the development of star systems, they are usually found in the outer reaches of our solar system, relevant to us, and become clearly visible when they visit the interior regions. For example, Halley’s Comet visits the inner solar system every 75 years. Some also take their time, sometimes 100,000 years between each visit, while others pass only once, before being thrown back into interstellar space.

Why be interested in comets? It should be known that one of the most widespread theories concerning the evolution of our good old Earth wants that at its origin, the latter was only a rocky desert, resembling the red planet, before being struck by comets which would have brought with them some of the most essential elements for the development of life. First, water. This is why scientists are very interested in these gigantic snowballs. To understand comets, in short, is to better understand the evolution of our world.

This was the goal of a team of researchers from the University of Cambridge. The latter has just announced the discovery of young comets orbiting around a star located 160 light-years from Earth, in the constellation of the Painter. This star, whose mass is 30% greater than that of the Sun, is only 23 million years old (4.6 billion years for our Sun). A young system, which is of great interest to scientists.

Indeed, for Sebastian Marino, astronomer at Cambridge Institute of Astronomy and main author of the paper presented at a conference in Chile, this new system  » is interesting to study to learn what our solar system looked like at the beginning of its existence « . He also states that  » Young systems like this are very active. Comets, asteroids and planets collide here « . According to him, there would even be a strong probability that planets orbit around this star. And who says combination of comets, planet and star says potentially presence of life.

For the moment, these « potential planets » are unfortunately impossible to detect, the current telescopes not being powerful enough. The latter, if they exist, are probably already formed, and the only way to see them would be to use a direct imaging system, which at the moment can only be used for very large planets like Jupiter. The discovery is nonetheless interesting, since it allows us to see what our solar system looked like at the beginning of its existence, when it was only a few million years old.