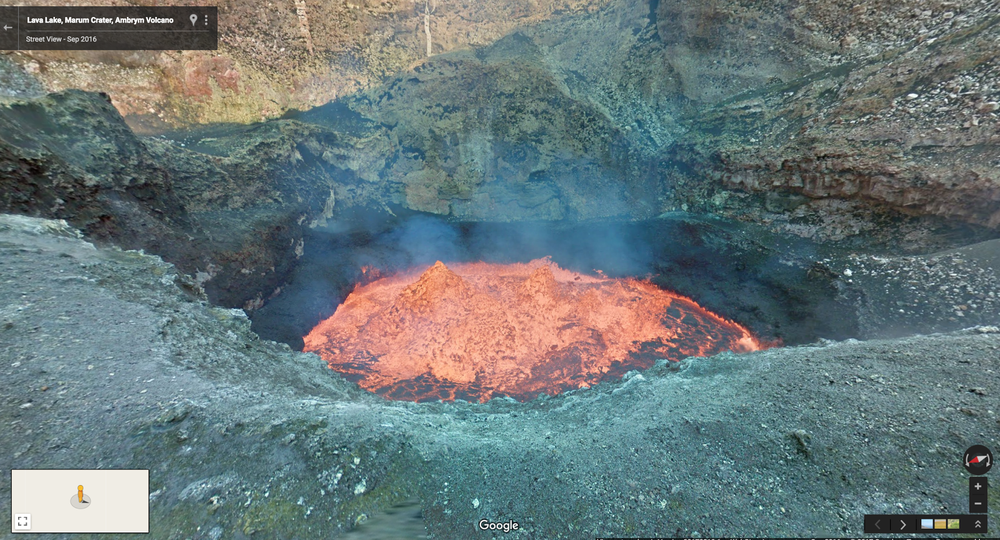 The giant Google’s Street View service already gives us the opportunity to “visit” some of the most emblematic places on the planet such as the Grand Canyon, Everest or even to embark on an ascent of Mont Blanc. From now on, it is on the island of Ambrym, in Vanuatu, that this service offers us to go, more particularly to the closest to one of the most bubbling lava lakes in the world.

In a blog note, Google explains that it has partnered with two explorers to offer this service. Geoff Mackley and Chris Horsley went to the Marum volcanic crater and abseiled some 400 meters to go and collect pictures to 360 degrees using the latest deviceGoogle imagery called Street View Trekker.

According to explorers and Google officials, this molten lake is the size of about two football fields.  » You only realize the insignificance of human beings when you stand beside a huge boiling lake of fire says Geoff Mackley.  » Standing on the edges and feeling that intense heat caressing your skin is phenomenal. I hope by putting this place on the map people will realize what a beautiful world we live in “, he adds.

On this island of Abrym, more than 7,000 inhabitants rub shoulders with the two active volcanoes, Marum and Benbow. Despite the unpredictable eruptions of the latter two, they have  » learned to live in harmony with these natural phenomena as beautiful as deadly « .