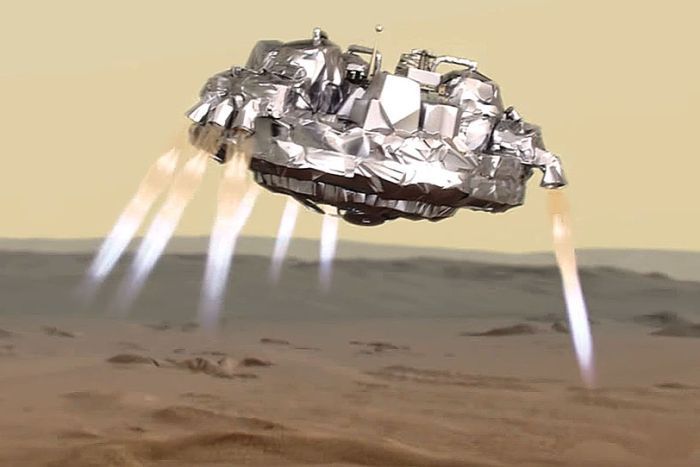 The European (ESA) and Russian (Roscosmos) space agencies are preparing to make history, since on October 19, the joint astrobiological mission Exomars 2016 will enter the Martian atmosphere, with in particular the planned landing of the module Schiaparelli on the ground of the red planet.

So far, only the Americans have managed to land gear on Mars, but they should soon no longer be alone in surveying the red planet. Indeed, the Exomars 2016 mission, a joint mission between the European and Russian space agencies, should enter the Martian atmosphere on October 19, for a program composed of two elements.

As soon as coveted Mars enters the atmosphere, the TGO satellite and the Schiaparelli module will separate to continue their respective missions. The TGO satellite, for Trace Gas Orbiter, will first analyze, with its Russian and European instruments, the gases present in trace amounts in the Martian atmosphere.  » TGO will begin its scientific mission after a year of « aerobraking » which will transform its initial very oval orbit, covered in four days, into a circular orbit covered in one day can we read on the CNES website.

For its part, the Schiaparelli module, an entry, descent and landing demonstrator module which owes its name to the famous Italian astronaut, will attempt to land gently on the surface of the red planet. This would be a major first after the failure in 2003 of ESA’s Beagle 2, which failed to deploy its solar panels and lost all contact with Earth.  » If all goes well, Schiparelli will then deploy his parachute and land with the help of three thrusters running on hydrazine. Once landed on Martian soil, Schiaparelli will analyze its surroundings.  » Scientific activities are made to make the most of the limited energy provided by the batteries, and they will therefore be implemented in periods rather than continuously, logically six hours a day explains the ESA.

Schiaparelli’s main role will be to test the technology for the other joint mission, Exomars 2020, which will place a Russian platform carrying a European vehicle on the surface of Mars. During this mission, the 310 kg vehicle will be equipped with 9 scientific instruments dedicated to the study and analysis of the soil during one Martian year (687 Earth days).  » A drill will be able to take samples up to 2 meters deep. At this depth, any organic compounds are preserved from the effect of radiation and oxidants which destroy them. »