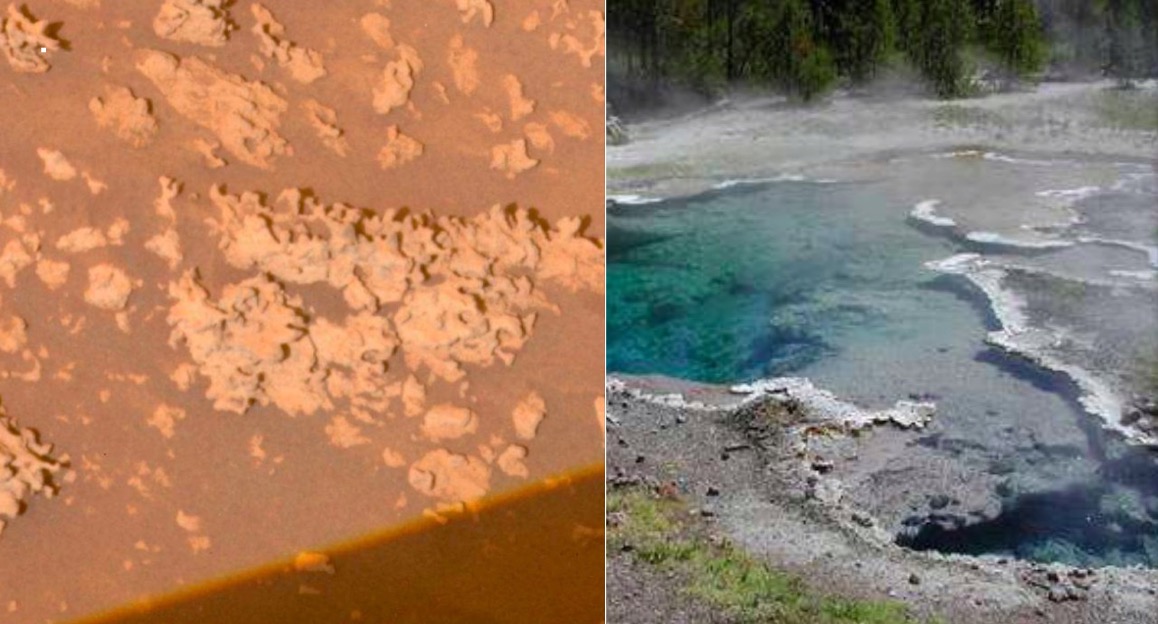 Almost pure silica deposits discovered nine years ago on Mars by the Spirit rover would be similar to those known near the geysers of El Tatio (in Chile) and we owe them to life.

In 2008 the Spirit rover discovered almost pure silica deposits in the Gusev crater on Mars. These deposits resemble those that form around terrestrial hot springs where they are associated with microbial life forms. Two exobiologists show today that some of these structures are similar to those known near the geysers of El Tatio, in northern Chile. Why is this important? The El Tatio formations, which appear to have a hydrothermal origin, were produced by a combination of biological and non-biological processes.

Searching for traces of life on Mars involves an in-depth study of hydrothermal vents. The development of biomass and the distribution of these organisms are in fact controlled by the availability of sources of nutrients and energy produced by the hydrothermal activity which captures and preserves the biosignatures of living organisms. El Tatio, Chile sits on the edge of the very dry Atacama Desert and is one of the sites on Earth that most closely resembles Martian soils, making it an interesting place to search for microbial life on Mars. . Further proof with this study conducted by the two exobiologists Steve Ruff and Jack Farmer who report that the hot springs analyzed on the site produce deposits of silica with structures influenced by organisms almost identical to those found eight years ago by the rover. Spirit in the crater of Gusev.

The question that naturally arises is whether these deposits discovered by the Spirit rover on Mars eight years ago could also have been influenced, shaped by life.  » Mars exploration is reaching a stage where we can start looking for biosignatures, those traces that indicate the presence of present or past life “, explains Steve Ruff.

Unfortunately, Spirit did not have sufficient instrumentation to probe the internal micrometric characteristics of Martian rocks. NASA nevertheless plans to send a new rover to Mars in 2020. The mission of the robot will be to examine parts of the planet whose conditions could have been favorable to microbial life by probing in the Martian rocks for traces of past life. .