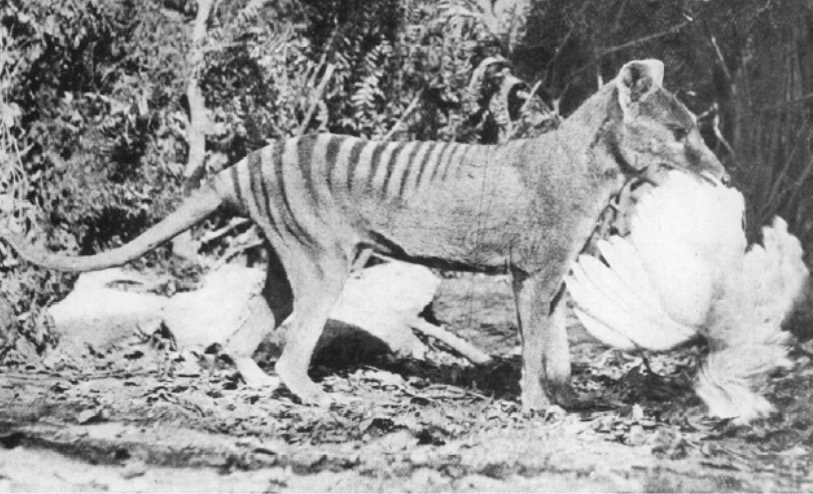 The Tasmanian Tiger was an endemic animal of this Australian island. Disappeared since the last century, the animal will be cloned by biologists in the more or less near future.

This animal was declared extinct in 2013, removed from Appendix I of the Convention on International Trade in Endangered Species, even though the last specimen of a Tasmanian tiger was observed in the wild in 1936, i.e. now 80 years old!

The Tasmanian tiger (or marsupial wolf or thylacine), not to be confused with the Tasmanian devil, is a carnivorous marsupial mammal the size of a wolf, with a tabby coat. Common for several millennia in Australia and New Guinea, its natural habitat has gradually been reduced to Tasmania, south of Australia.

Technology could bring this extinct animal back to life through cloning. Mike Archer, director of the Australian Museum, found 15 years ago samples of Tasmanian tiger DNA dating from 1866. Perfectly preserved in alcohol, they can allow such manipulation.

According to Mike Archer, “The question was not whether we could do it, but when. »

Since April 2016, biologists have been trying to understand the animal’s genetic code in a Sydney laboratory, using samples from heart tissue, muscle, liver and bone marrow. The genetic template of the Tasmanian tiger will then be inserted into the egg of a species close to it, such as the numbat or the Tasmanian devil.

There are many cloning programs for species that have now disappeared, but the Australian Museum is the only one to have samples of such good quality. According to Mike Archer, it would take between 10 and 15 years to successfully clone the Tasmanian tiger.

The optimism of Mike Archer is fought by religious groups, believing that the scientist would take himself for God. The latter replied that “the people who exterminated this animal are the first to have taken themselves for God”.