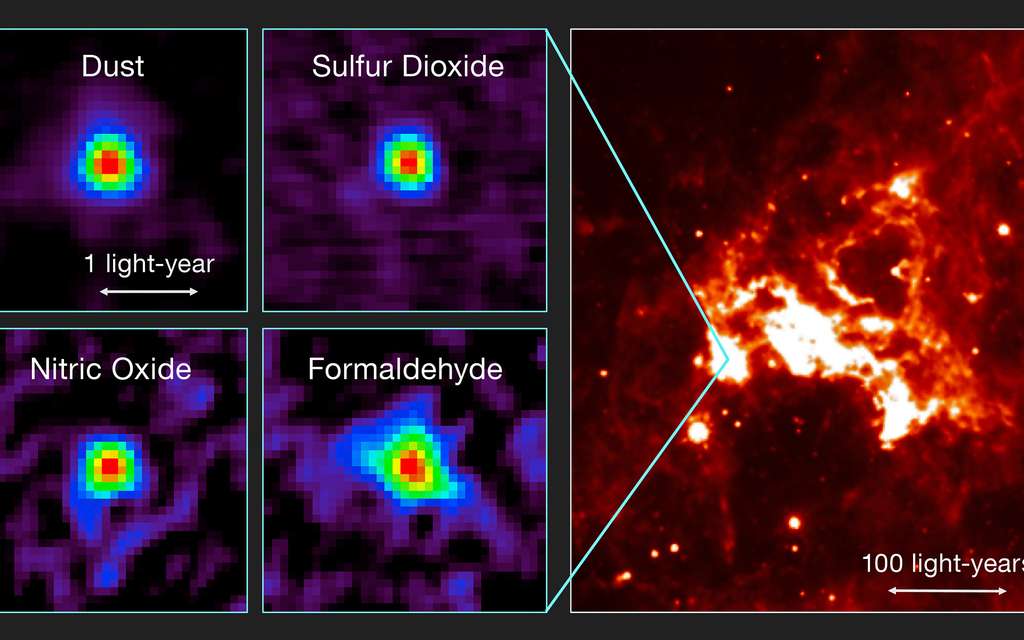 After analyzing the chemistry in the Large Magellanic Cloud, a team of researchers announces the discovery of a molecular cloud surrounding a star cataloged as ST11.

The Large Magellanic Cloud is a relatively nearby spiral galaxy, located about 160,000 light-years from the Milky Way. By combining data collected by the Alma telescope in Chile, a team of Japanese astronomers discovered, around a star, a cloud of complex molecules of high temperature and density, whose molecular composition differs from that of similar objects. discovered within our own galaxy.

Takashi Shimonishi, an astronomer at Tohoku University in Japan and lead author of the study, enthuses: « This is the first-ever detection of a hot extragalactic molecular nucleus, which attests to the tremendous potential of this new generation of telescopes to study astrochemical phenomena beyond the Milky Way”.

Thus, the chemistry of the Universe could be much more diversified than envisaged. Indeed, if the researchers detected the chemical signatures of known molecules such as sulfur dioxide, nitric oxide and formaldehyde, methanol, on the other hand, is found in particularly small quantities compared to those measured in the Milky Way. Only, methanol could have played an important role in the prebiotic chemistry at the origin of life on Earth.

It could therefore be that the chemical evolution of our galaxy is not representative of those of other galaxies. In other words, that the Milky Way has a chemistry favorable to the emergence of life. Unless, of course, the Large Magellanic Cloud is an exception compared to other galaxies.

The Large Magellanic Cloud is indeed characterized by a low abundance of elements heavier than hydrogen and helium, which, according to the researchers, would not be without consequence on the molecular chemistry surrounding the young star ST11. Hence the differences in chemistry observed. Other observations will nevertheless be necessary to refine our conclusions.