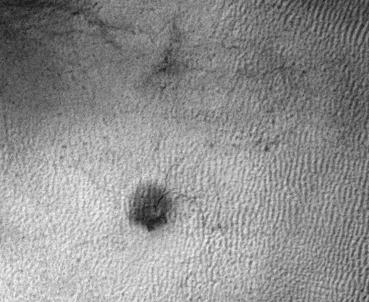 For the very first time, researchers have been able to observe the beginnings of the formation of a Martian « spider », one of these structures characteristic of the region of the Martian South Pole.

If you grew up with Total Recall, you probably imagine the red planet with its large expanses of dust dotted with a few mountains and craters here and there. The latest images filmed by Curiosity are also an incredible reminder. But Martian landscapes are not « just » that. Yes, because among the geological configurations that have long intrigued observers, there are spiders. And spiders, researchers have been able to see them grow for the very first time.

We’re not talking about arachnids here. What scientists call Martian “spiders” are geological configurations whose shape vaguely recalls that of your favorite critters, due to their highly branched profile, not to say “arachneiform”. They are only found at the South Pole. The ice found in this part of the Martian globe is largely devoid of water: « dry ice » which is actually frozen carbon dioxide. This gas, which makes up most of the atmosphere of Mars will freeze during the low temperatures of the Martian winter (which lasts six months) and will enrich the seasonal ice cap. It is in these terrains that spiders are formed, depressions that, with erosion, expand and end up forming characteristic structures that have earned them the comparison with arachnids.

Scientists have been developing a theory for several years on the formation of these depressions of various sizes, which range from a few tens to a few hundred meters in length. The responsible would be carbon dioxide and the spring sun, which gradually warms the Martian soil. Part of the carbon dioxide located below the seasonal ice cap will sublimate, passing directly from the solid state to the gaseous state. As the pressure mounts, it ends up cracking the ice, taking with it particles of sand and dust. Over the years, this phenomenon will erode the soil, widening the cracks and extending them. Spiders grow.

So far, probes in Mars orbit have failed to capture images showing their formation. It is now done, thanks to the pictures taken by the high-resolution camera of the Mars Reconnaissance Orbiter probe. The snapshots span three Martian years, or almost six years in Earth time.

« Much of the surface of Mars looks like Utah if you stripped all the vegetation, but these ‘spiders’ are a unique relief of Martian landscapes, » notes Candice Hansen of the Institute of Planetary Sciences in Tucson, Arizona, and co-author of the report. This new research sheds light on how carbon dioxide is shaping the Red Planet in almost « supernatural » ways.