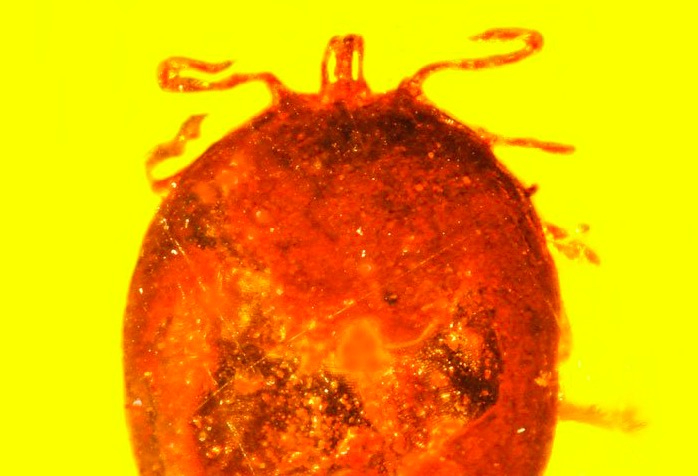 A team of researchers announces having discovered the fossilized red blood cells of a 30 to 45 million year old primate inside a tick found stuck in amber.

Imagine the scene: 45 million years ago, a tick reveled in the blood of a primate in a humid tropical jungle deep in a mountain range in what is now the Dominican Republic. Suddenly, another primate delousing the first then discovers a tick that had nothing to do there. The second primate snatches the tick and throws it to the ground from the top of its branch. She then finds herself in the wrong place at the wrong time, trapped in the flowing resin of the tree on which our two primates were delousing themselves. The resin then eventually fossilizes and turns into amber.

This scene, it is the paleoentomologist George Poinar, of the University of Oregon, who imagines it. And this story could well be that of the oldest fossilized red blood cells of a mammal known to date. A piece of amber containing a tick was indeed found by this man in a mountain range in the Dominican Republic. The detailed analysis of the discovery reported in the Journal of Medical Entomology notably revealed that the insect’s body contained red blood cells that probably belonged to ancient primates 30 to 45 million years old.

The sample not only details the last meal of this ancient tick, but by examining the scene under a microscope, the researcher also explains that he found traces of parasites babesia microti which typically infect human and simian blood cells. These protozoan parasites cause babesiosis, a disease similar to malaria.

Below are the details of the tick, then the fossilized red blood cells found inside:

» Fossilized blood cells infected with these parasites are simply amazing in their detail », enthuses the researcher who recalls in particular that « life forms found trapped in amber can tell us a lot about the history and theevolution of diseases against which we still have to fight today. This parasite, for example, was clearly already present millions of years before humans and appears to have evolved alongside primates, among other hosts. « .