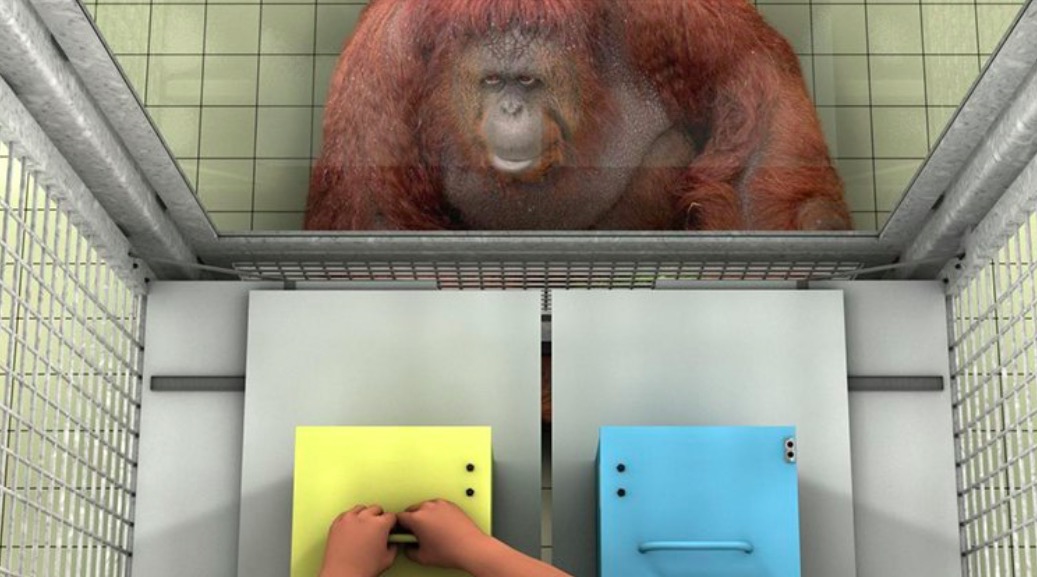 A recent study published in the journal PLoS One suggests that great apes are able to guess when a person is wrong and take it into consideration. This is a sign of previously unsuspected advanced social cognition in these primates.

It is unlikely that you will ever face this situation. But even so, imagine yourself in a parallel world: you are around a table facing a bonobo, chimpanzee or an orangutan and you are playing a game in which you both master the rules. It’s your turn to play, you’re convinced you’re right, but you’re wrong. The great ape in front of you, pear, would actually be able to guess that you were wrong and take you into consideration. The example is pushed here, extrapolated, but the idea is ultimately the same.

Researchers at the Max Planck Institute for Evolutionary Anthropology in Germany conducted psychological experiments on a group of 34 great apes consisting of chimpanzees, bonobos and orangutans from the Leipzig Zoo. They then subjected our primates to a test normally developed for children aged one and a half. And what was the surprise of the researchers!

The test was as follows: a person placed an object in one of the two boxes located in front of him, in the presence of a great ape. Then a second person took the object out of the box to put it in another box and then locked the two boxes. In the first case, subject number one remained in the room and saw that the object had been moved, knowing exactly where it was. In the second case, the second person left the room and was therefore unaware that the object had moved. She thus had false information and was looking for when she came back to open the wrong box.

The monkey that knew how to unlock both boxes could decide which one to open for those two people during the test. Are you there? The researchers then observed that the primates had clearly helped the wrong person more. This behavior suggests that these great apes use their understanding of what a person thinks is reality to decide whether or not to help them.

» Understanding when someone else believes something that is wrong is a sign of advanced social cognition and scientists thought great apes lacked this ability “, explain the researchers.  » This research shows for the first time that chimpanzees, bonobos or orangutans can use their understanding of false beliefs to help others « .

The scientists conclude that if these observations are supported by other experiments, it will mean that great apes like humans may be able to « read » the minds of others in the context of social interactions. Assuming that we share more than 99% of our DNA and that we all belonged to the same species about 15 million years agoit is not surprising to note thathumans, chimpanzees, bonobos and orangs-utans share similar cognitive abilities.