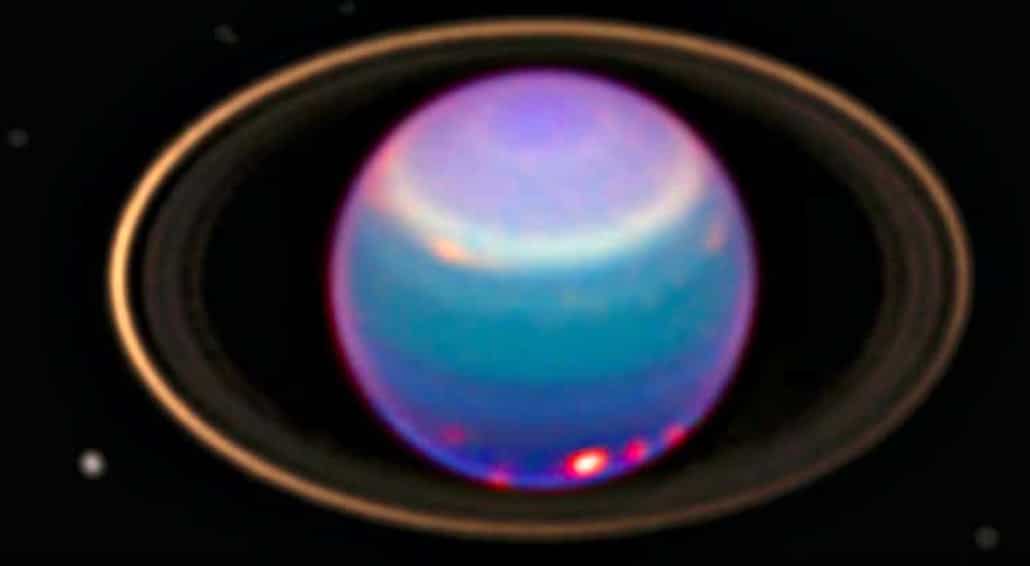 After having re-examined the data collected by the Voyager 2 probe in 1986, two researchers announced that they had detected the presence of two moons never before discovered in the rings of Uranus.

30 years ago Voyager 2 visited Uranus, revealing new views of this mysterious planet. Many data were then collected, allowing in particular to determine the chemical composition of the planet’s atmosphere (85% hydrogen, 15% helium), to deduce the probable existence of an ocean of water and methane 800 km under the clouds and to analyze the curious magnetic field of Uranus. Unlike the other planets, the magnetic poles of Uranus are not located at the top of it, but are much closer to the equator. But in reexamining data transmitted by the probe in 1986, researchers Rob Chancia and Matthew Hedman of the University of Idaho reported patterns that may be the wakes of small moons orbiting outside the rings of Uranus.

Because yes, like the other gas giants of our solar system, Uranus has a system of rings, much less visible than those of Saturn, of course. And like Saturn, Uranus is home to many natural satellites, 27 to be exact. Their number could nevertheless swell. Reviewing old data from Voyager 2, the researchers did indeed discover patterns in the Alpha and Beta rings. Patterns that could be the wakes of small moons orbiting between these rings. If these moons do exist, they would be very small (about 14 kilometers in diameter) and very dark, due to their position very far from the sun (2.877 billion km).

However, other measurements will be necessary to confirm the hypothesis. The two researchers will soon use the Hubble telescope to observe the rings of Uranus. Voyager 2’s visit was indeed too short to collect more views and data. Its passage around Uranus was mainly intended to give the probe additional gravitational acceleration to reach Neptune and finally head towards the edges of the solar system.