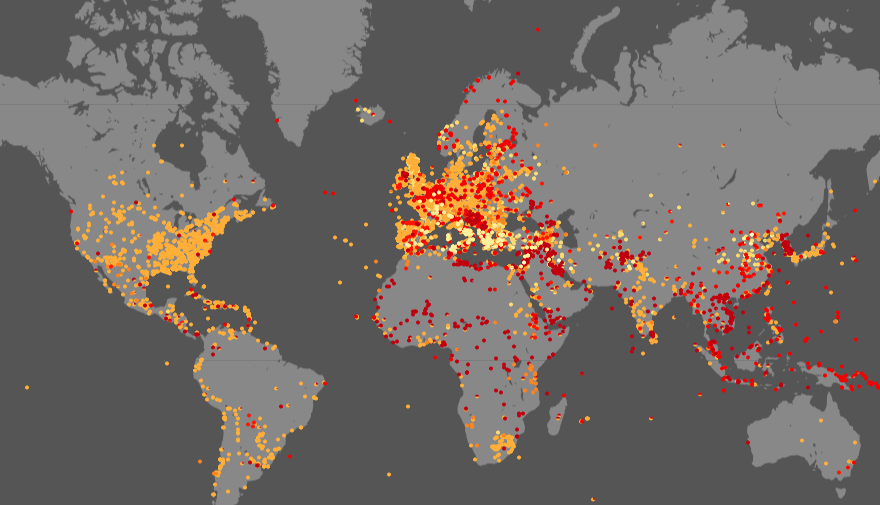 A Dutch company has designed an interactive global map highlighting the locations of battles that have taken place over the past four millennia. CitizenPost presents this map to you and offers a small focus on France.

Pim van Bree and Geert Kessels founded the company LAB1100 in 2011 based in The Hague, the Netherlands. This research and development company specializes in the development of tools (software, applications, etc.) dealing with new media or here, history. LAB1100 also collaborates with research institutes and universities.

The interactive map of conflicts covering the last four millennia is part of the data-visualization. It integrates, through DBpedia and Wikidata, data concerning the locations of the battles, as well as their date.

The map, on a gray background, highlights a multitude of colored dots ranging from beige to dark red (from the oldest to the most recent). Each point represents a battle, and we immediately note full coverage of Europe, for which the available data is the most complete.

Note that there is no border materialized on the map, obviously for reasons of reading comfort, but above all that this type of information does not seem useful on this document containing 4000 years of battle history.

What happens when we focus on French territory? It is quickly possible to realize that most of the battles took place between 1500 and 1914 in the north and north-west of the country (100 Years War?), where we find a good number of colored dots orange, for the most part.

When you click on a point, information (in English) about the battle is available, such as the precise date, the coordinates, the source of the information as well as the name of the battle. Here is an example, that of the battle of Craon which took place on May 24, 1592, having opposed the royal army commanded by the Prince of Conti to the league army, within the framework of the wars of religion.

Source: The Independent – ​​The Telegraph