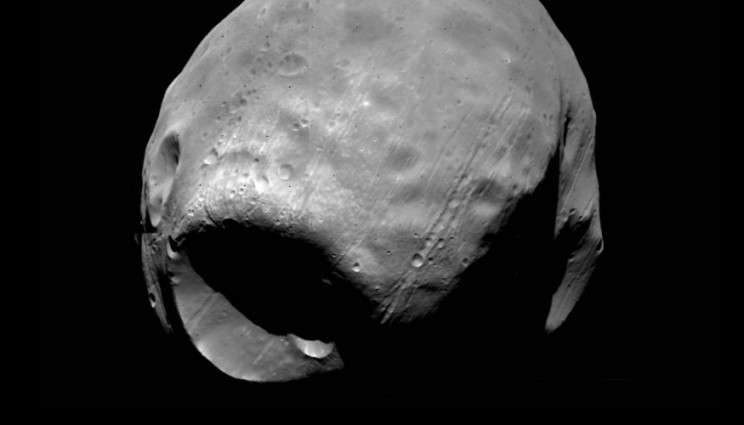 Phobos, the largest moon of Mars with the appearance of the « Death Star » has always captivated astronomers with its share of mysteries. Recently, numerical simulations have lifted a veil over its gigantic 9 kilometer wide crater.

Phobos is one of the two moons of Mars, orbiting 6000 km from the surface of its planet. 22 kilometers wide, the satellite sports a gigantic crater 9 kilometers in diameter covering almost half of the moon. An astonishing physique which is reminiscent of that of the Death Star, in the Star Wars films. But over the decades, understanding how such a crater formed has proven difficult for researchers.

For the first time, physicists from the Lawrence Livermore National Laboratory (LLNL) have demonstrated, by 3D numerical simulations, how an asteroid or the impact of a comet could have formed this mega-crater without completely destroying Phobos. The study was published in the journal Geophysical Review Letters.

While previous simulations, in 2D at lower resolutions, were unable to take into account in their calculations the porosity of the crust of Phobos, non-spherical and strongly cratered, these new 3D simulations at high resolutions were able to take into account take into account all the physical characteristics of Phobos, which once belonged to the asteroid belt. Thus, the researchers put forward several possible scenarios, but the most plausible remains the collision of an asteroid or a comet about 250 meters in diameter, impacting the moon at more than 6 kilometers per second.

Note that the researchers use a similar method to simulate the different ways of deflecting potentially dangerous asteroids for Earth. « The impact of an asteroid as large and fast as the one that caused the Stickney crater, on Phobos, would have a devastating effect on the Earth », declared in particular Megan Bruck Syal, principal author of this study. « If a potentially dangerous asteroid were to cross paths with Earth, it will be essential to ensure that we are able to deflect it. »