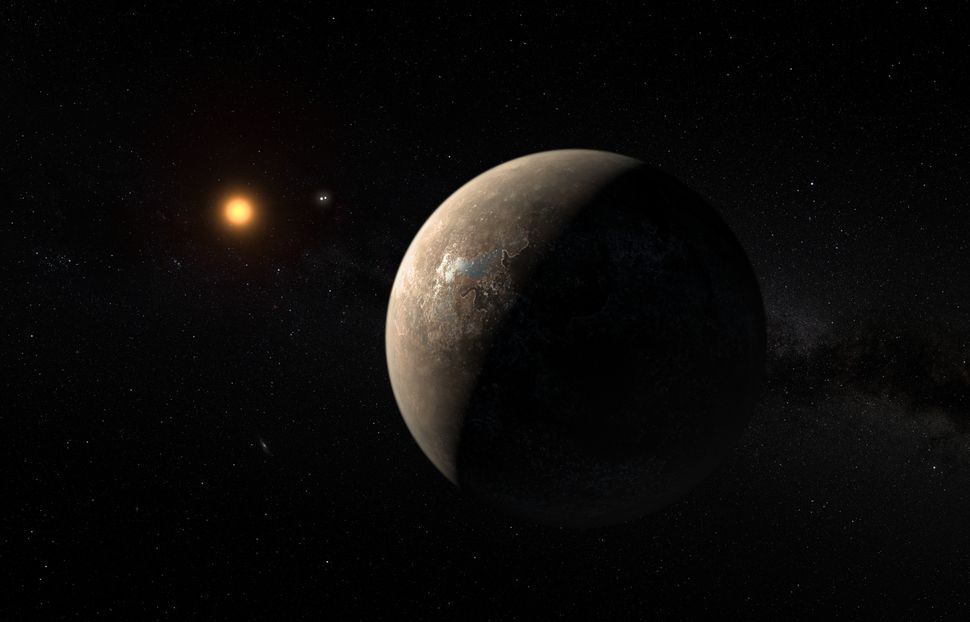 The European Southern Observatory (ESO) has just discovered a potentially habitable planet: Proxima b, which orbits the closest star to us, Proxima Centauri. A trip is not planned for today, but how long would it theoretically take us to reach it?

Proxima Centauri is the closest star to our Solar System, about 4.25 light-years away. This distance is enormous for us, but is very small on the scale of the Universe. Indeed, in the state of our current knowledge, it is a galactic ocean that is still impassable. Thus, we will need serious technological advances to achieve this.

And yet, despite the fact that it is very close to its star (therefore its sun), at a distance 7 times smaller than the Mercury-Sun distance, Proxima b could be conducive to life. The low luminosity of Proxima Centauri would allow such a scenario. A year on Proxima b is therefore very short, only 11 days compared to 88 days for Mercury, which takes this long to complete one revolution around the Sun.

“Is there water on the surface, any signs of life? To be sure, you have to go there. There is no grander vision for humanity. » says Debra Fischer, an astronomer at Yale University (USA).

We cannot get there with our current level of technology, but it is possible and interesting to calculate the time it would take for a manned voyage to get there, given the various means available or potentially to come.

With a probe NewHorizongetting to Proxima b would take 78,000 years.

Going at a speed of 17 km/s, this probe had already taken an entire decade to reach Pluto. NASA has also explored a track leading to the design of an engine that works with nuclear power. Estimates indicate that this technology would allow travel between Earth and Mars in three months, but to go to Proxima b, on the other hand, it will take a millennium.

The next track is hardly considered, surely because of the danger of not being able to complete the journey. According to Stanislaw Ulam, during the Orion project (1947), had proposed to recover the breath of the explosion of nuclear charges in order to reach an acceleration speed equivalent to 5% of the speed of light (15,000 km / s) . Thus, the journey would last a century, but the risk of not arriving at its destination is too great.

36 years of travel thanks to the nuclear fusion engine

By staying in nuclear, there would be another solution that would allow a trip to Proxima b lasting « only » 36 years! It is even the project on which the most hope is based. It consists in controlling a nuclear fusion engine in order to reach 10% of the speed of light (30,000 km/s), according to astrophysicist Michaël Gillon. However, we are already having a hard time controlling this bias when it comes to electricity production. Moreover, the fuel poses a problem: we would have to recover Helium 3 on the planet Jupiter. So we will have to wait!

25 years of travel thanks to the solar sail

There remains a possible solution, a project launched by the Russian billionaire Yuri Milner, with the support of the eminent Stephen Hawking. Baptized Starshot, this project would allow a journey lasting 25 years. It is a question of accelerating tiny probes (less than 1 gram each) by bombarding from the Earth and by means of a laser, their « solar veil » which is none other than a large film of a few atoms thick. The theory is that the speed reached represents 20% of the speed of light, or 60,000 km/s. However, scientists estimate that such a system will only be operational in at least two decades.

In the best case, we would have to wait at least another half century before reaching Proxima b, and in the worst case, we will never get there. Especially since many questions animate the scientific community, for example about its atmosphere, whose question of the presence of a magnetic field remains unanswered.