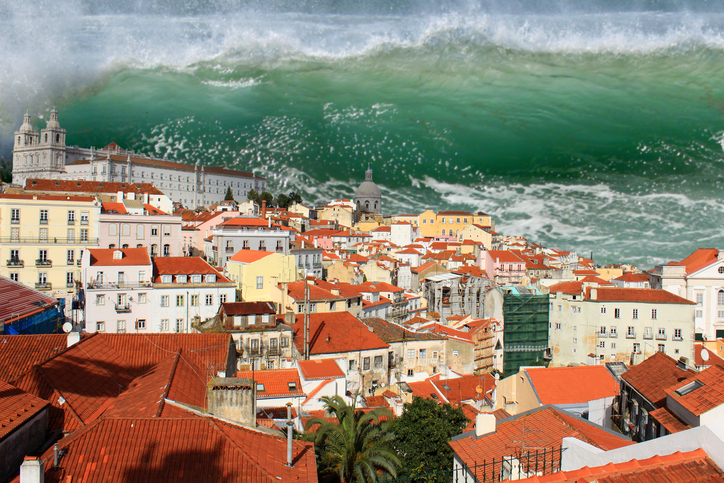 The tsunami is the fear of many countries, especially in Asia. However, a Spanish documentary recently explained that the risk of a huge tsunami was now very real in Europe and could hit the Iberian Peninsula with thousands of victims.

In its most dangerous form, the tsunami takes the appearance of destructive waves of great height hitting the coastlines with power. This type of event is usually caused by an earthquake, but can also be caused by an underwater landslide or a volcanic explosion responsible for the sudden displacement of a large volume of water.

Tsunamis are very feared, particularly in Japan where the name comes from. Everyone remembers the latest event: the terrible tsunami that caused the Fukushima nuclear accident. Going back a little further, it is also possible to cite the 2004 tsunami in the Indian Ocean, which mainly affected Southeast Asia and the Indian subcontinent, with a death toll of 250,000.

Such events are very rare in Europe, but a recent documentary called The gran ola (the big wave) estimates that it is a matter of time before a huge tsunami hits Spain and Portugal with full force. It is estimated that the coasts of these countries are very ill-prepared for a possible disaster of this type, which could then cause thousands of deaths and considerable damage.

The documentary compares this possible disaster to another tsunami that appeared just after the Lisbon earthquake in 1755. The tsunami and the numerous fires generated had decimated between 50,000 and 70,000 dead and destroyed the Portuguese capital almost in its entirety.

The fact is that said earthquake is too old to have been measured by seismographs. This was evaluated at 8.5 (9 at most) on the Richter scale, an estimate obtained according to the geological context and statements concerning the distribution of destruction. As for the epicenter, although the exact location is still debated, everyone agrees to place it in the Atlantic Ocean nearly 200 kilometers southwest of Cape Saint-Vincent. Paleoseismological studies have estimated the recurrence of such an event at between 1500 and 2000 years.

The documentary questioning many scientists on the issue evokes an area that could be particularly affected: the Gulf of Cadiz, a region very popular with tourists and expatriates which has faults that could be the cause of an earthquake at any time. what time according to the Daily Mail.

“The question is not whether there will be another tsunami, but when it will happen,” says Begona Perez, head of the oceanography division of Spanish ports.

The Spanish daily El Pais interviewed the director of the documentary, Fernando Arroyo, the latter pointing to the laxity of the authorities:

» It’s the truth. You can believe it or not. For several days, large areas could not be evacuated. There will be no more electricity, more means of communication, more water. Whole towns, like Cadiz, will have to be evacuated. »