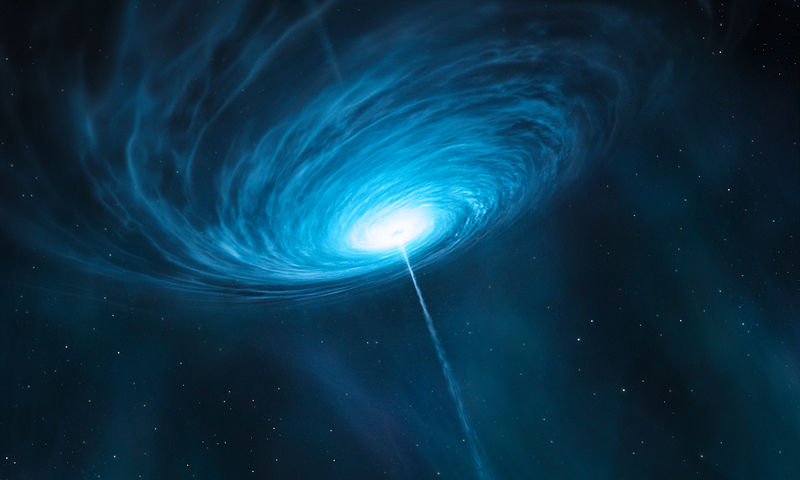 By observing a supermassive black hole “feeding”, astrophysicists made a surprising discovery: the ogre was consuming clouds of cold gas, and not plasma, as they believed.

According to a study published in the journal Nature by an international team of scientists, the black hole at the center of the galaxy Abell 2497, the largest of a cluster of a hundred galaxies located around 1.2 billion years ago -light of the Earth, does not seem to like hot meals. Indeed, while scientists agreed that black holes fed on extremely hot, spherical and smooth plasma, they observed for the very first time one of these ogres « eating » clouds of cold gas.

» Astrophysicists must therefore revise their theories on the interactions between black holes and the giant galaxies that surround them“, comments the Professor Gant Tremblay, the main author of this study.  » Our observations are totally incompatible with our theories“.

Scientists were able to observe the black hole thanks to the Atacama Large Millimeter Array (ALMA), an international radio telescope established in Chile very sensitive to radio waves of cold and molecular gases. It can’t quite detect hydrogen, which makes up most of the cold clouds scattered across the center of a galaxy, but it can see carbon monoxide, an « impurity » whose presence indicates that clouds of gas are very cold, about minus – 129°C. By observing the movement of carbon monoxide, they notably observed piles of cold gases which moved by plunging towards the black hole at a speed of about 300 kilometers per second.

The mass of these molecular clouds is estimated to be about one million times that of Earth. A cluster of very cold gas, which will serve as fuel for this hyper massive black hole. The researchers have also calculated that there were enough clouds of cold gas in this gigantic galaxy – 300,000 light-years in diameter, three times larger than our Milky Way – for the black hole to be fed indefinitely.

The surprising discovery should therefore lead scientists to question the theory that black holes feed only on hot plasma.