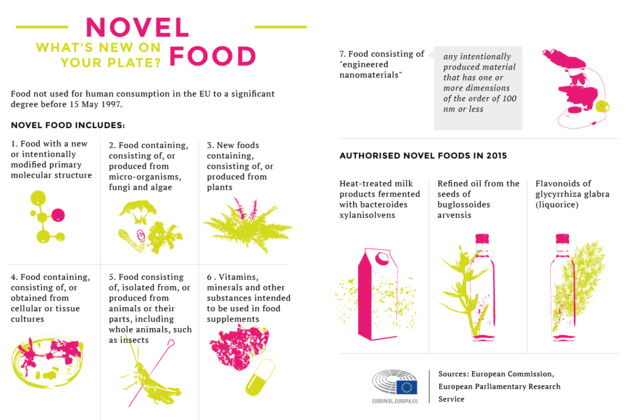 On October 28, 2015, the European Parliament approved the revision of the legislation around “novel food”. The latter, if accepted by the Council of Ministers, will authorize “new foods” – including insects and nanomaterials – to circulate in European territory. Although the text seems to attach importance to food safety, all the proposals did not meet with unanimous approval among MEPs. Explanations.

The last European legislation on new foods dates from 1997. However, technologies have since evolved and opened the door to new markets and new proposals for solving certain food-related problems. The text voted on during the last plenary session in October was therefore mainly aimed at breaking down barriers deemed archaic.

In doing so, the resolution introduces « categories for foods whose molecular structure is new or has been deliberately modified, as well as for foods derived from cell or tissue cultures obtained from animals, plants, micro-organisms, fungi or algae, and for foodstuffs derived from materials of mineral origin. A category should also include foodstuffs derived from plants obtained from non-traditional propagation practices, where such practices lead to significant changes in the composition or structure of foodstuffs affecting their nutritional value, metabolism or content of substances unwanted. Foods composed of certain micelles or liposomes may also be included in the definition of novel foods. »

OPEN THE DOOR TO CULINARY INNOVATIONS

To take a concrete example, this means that a hamburger with freeze-dried mealworms, as imagined by the fast food chain Speed ​​Burger on the occasion of Halloween, will no longer be prohibited by the repression of fraud as it was the case. « We were perhaps a little too creative compared to the French state » was still ironic a few days ago Bruno Bourrigault, co-director of the brand. For the European institution, a novel food is a “foodstuff for which human consumption remained negligible in the European Union before the date of 15 May 1997.” The fact remains that in fact, the consumption of insects is tolerated, even legalized in certain countries such as Belgium and the Netherlands. In addition, the UN supports the development of entomophagy to counter hunger in the world. We can therefore imagine that sandwiches filled with beetles will no longer be banned on the continent in the near future.

However, insects represent only one of the 7 new foods validated by the European Parliament. The authorization of food that consists of « manufactured nanomaterials » has thus been the subject of debate. Along with food derived from animal cloning, it is one of the points of contention in the dossier. To increase the resolution that had been a problem for several years, the authorized limit was increased from 500 nanometers of nanomaterials to 100 nanometers. The cloning part was subject to specific measures. But like insects, nanomaterials did not wait for legislation to enter European territory. José Bové (EELV) thus recalled in an alarming manner that “more than 80 products already on sale on the European market contain nanoparticles, without the consumer knowing it. »

However, the European Union wants to be reassuring by specifying that the products on the initial list only concern “Novel foods already assessed for safety, which have been legally produced and placed on the market in the Union and have shown no health risks in the past. » It is emphasized that, for the other cases, “the examination procedure should be used for the adoption of implementing acts. »

The procedure consists in particular of having each new food examined by the European Food Safety Authority (EFSA) before it is marketed. The organization evaluates the potential toxicity of the product and the possible nutritional imbalances induced by its introduction into the overall diet.

PRODUCTS AT THE SERVICE OF HEALTH

In fact, the file highlights above all the positive points of the new authorized foods: “New technologies and innovations in food production should be encouraged, as they could reduce the impact of food production on the environment, improve food safety and bring benefits to consumers in so far as a high level of consumer protection is ensured. » During the debate in the European Parliament, the Dutch MEP Anja Hazekamp (European United Left, Nordic Green Left) underlined, however, the primacy of the economic interest of « These new rules [qui] are made above all to enable large agri-food groups to develop new activities and increase their profits. »

Still, if the text passes the Council of Ministers, which is very likely, we should be able to obtain exotic fruits still unknown in Europe, dairy products enriched with phytosterols to reduce cholesterol, preparations based on insects or microalgae or fruit juices from new production techniques. Nanomaterials, for their part, are useful for reducing the fat, salt, calorie or emulsifier content of food and for facilitating the assimilation of nutrients or food supplements by the body.

CONTROVERSIES ON THE AUTHORIZATION OF NANOMATERIALS IN FOOD

This is at least the arguments put forward in the file. It is clear that it is precisely the question of nanomaterials that has generated the most heated exchanges, despite the revision of the text. Among the 202 MEPs who voted against the reform project, Marie-Christine Boutonnet (National Front) denounces “the absence of any real study on the health impacts – the particular risk incurred by pregnant women and babies, [et] the absence of legislation on this subject for animal feed. »

José Bové (EELV) also voted against and supports his position by referring to the American donut company, Dunkin’ Donuts, which “has just removed nanoparticles from its products because there is a health risk. » The Green MEP recalls that the« We already know that [les nanoparticules] cross the cell wall and create a number of problems, especially in young people. »

These perorations are to be taken seriously, judging by the Nanotechnology Industries Association (NIA). For this independent body, the text is “vague, obscure and strongly contradicts established regulations on nanomaterials, which have been effectively used for years by European institutions. » Thus, the part authorizing the materials  » compound[s] distinct functional parts” is a problem according to the organization, because the term “separate functional parts” confusing and “adds further complexity given that it has little scientific basis and opens the door to a wide range of interpretations when applied. »

WARNINGS ON OTHER NOVEL FOODS

In addition to manufactured nanomaterials, the 6 other foods authorized by Parliament are not to be outdone and are also the subject of certain warnings. Regarding novel foods that contain or are produced from plants, the European Consumers’ Organization warns that “The fact that a tropical plant has been consumed for decades in a third country without reported damage does not mean that the product is safe. We are counting on the European Food Safety Authority (EFSA) to collect the kind of evidence necessary to demonstrate the non-dangerousness of the consumption of exotic products. »

The EFSA has also recently assessed the risks of eating insects. The institution’s official website reports that “According to EFSA scientific experts, the possible presence of biological and chemical risks in food derived from insects would depend on the production methods used, the substrate on which the insects are fed, the stage of the life cycle at which the insects are « harvested », the species of insect, as well as the methods used for their further processing. » To put it another way, if the risks exist, they are not intrinsically linked to the product.

THE CONSUMER TAKEN AS A GUINEA PIG

The EFSA is therefore the last barrier to authorize a new food to circulate on the European market. But is this lock really reliable? Parliament stresses in its report that “Novel foods should be safe, and if their safety cannot be assessed and scientific uncertainty persists, the precautionary principle may apply. » The use of the verb can explicitly underline that this is only a possibility and in no way a requirement. The precautionary principle should however be imperative. Would we then be the guinea pigs of this food of the future?

And the Parliament report adds: “requirements for post-market surveillance may therefore be justified by the need to collect information on the actual marketing of food. » A food is authorized if it “does not present any safety risk for human health, taking into account the available scientific data. » In other words, the idea that the available scientific data may be insufficient to make the link between a pathology and a food will not prevent the sale of said food.

In France, the National Food Safety Agency (ANSES) provides precisely this kind of data. Via its nutrivigilance reporting form « improve consumer safety by quickly identifying possible adverse effects related to consumption », it collects data from people who have consumed new products. It is regrettable that this is an after-the-fact verification based on an almost forced participation of the citizens. It should be noted that ANSES works in close collaboration with European organizations such as EFSA. It is therefore this type of data that allows us to learn more about the effects of products such as guar gum or noni juice.

More specifically, the European Parliament even recognizes the lack of scientific knowledge on nanomaterials: “to better assess the safety of nanomaterials for food use, and to address the current knowledge gap […]test methods […] might be needed. »

Without dwelling once again on the use of the verb power, it seems that the report half-acknowledges the potential dangerousness of nanomaterials and the status of “guinea pigs” endorsed willy-nilly by consumers. All of this is once again denounced by MEPs who are unfavorable to this part of the text, such as Joëlle Mélin (National Front) who affirms that“with nanomaterials, we risk considerable health scandals”.

In summary, while it is appreciable that the European Union has revised the legislation in force on food, which had become obsolete since 1997, it is regrettable that the question of manufactured nanomaterials has not been the subject of a separate vote, in the same way as food from cloned animals. Respect for the precautionary principle seems to have been flouted, and unless the Council of the European Union refuses the file, the measures will be ratified as they are.

By Jean-Baptiste Roncari with Le Journal International, partner of SciencePost