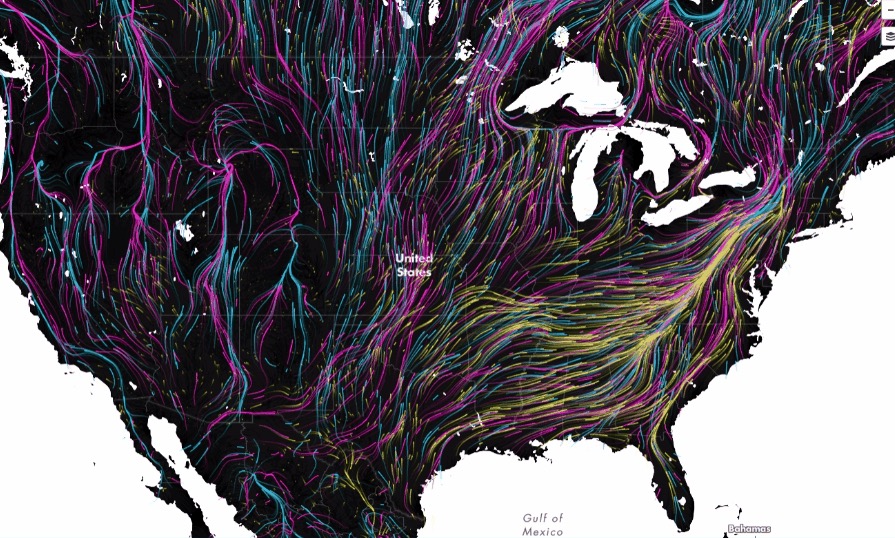 In response to climate change, animals are forced to migrate to survive, opting for higher latitudes at the expense of equatorial zones, which are too hot and too dry. Researchers at the University of Washington have created a animated card to illustrate these movements.

Historically, many animal species have moved to adapt to climate change. However, modern movements are likely to be limited by human-dominated and shaped landscapes, such as our cities, roads and agriculture.

In 2013 a study published in Ecology Letters examined the probable movements of almost 3000 species of vertebrates including mammals, birds and amphibians, in response to ongoing climate change. The researchers then anticipated which paths would be taken in the decades and centuries to come. Three years later, an animation is available:

The map is color-coded which defines separate movement patterns for mammals (purple), birds (blue) and amphibians (yellow) in North America. The animations show us a massive exodus towards the northern regions, with darker areas at the levels of the big cities and the Great Lakes region.

In the United States, researchers predict in particular that the Appalachians, a mountain range located in the east of North America which extends from Newfoundland in the north, to the center of the State of Alabama, will likely be used by species moving north. Further west, mountain ranges and protected areas will also serve as conduits, and the highest mountains will serve as refuges.

In South America, there is clearly a projected movement of species further west, fleeing the Amazon with great fanfare:

Researchers now plan to map migration of species in the United StatesUnited, in particularly in the regions ofWest, at finer resolutions. By anticipating the migratory flows that respond to climate change, researchers will then be able to define the priority areas to be protected.