Italy is not such a calm place in Europe, and the news reminded us of this very recently with the last earthquake having made 292 victims. The activity of tectonic plates is the reason for this exposure to various disasters.

The African tectonic plate meets the Eurasian plate and gradually sinks under it, this is the phenomenon of subduction. This extremely slow movement causes earthquakes, such as that of August 24, 2016 in central Italy, reminiscent of that of L’Aquila on April 6, 2009. This country is also at the junction of the two plates, which makes it an area prone to this type of disaster. 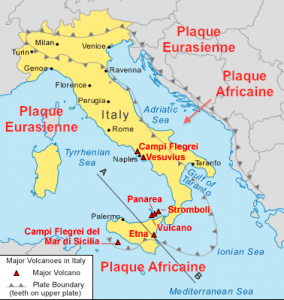 Italy also has many volcanoes, such as the historically famous Etna and Vesuvius, as well as Vulcano and Stromboli, located on the Aeolian Islands. However, there are others that should not be overlooked, such as the Phlegrean Fields (Naples) and the Alban Mountains, southeast of Rome.

The interest is also mainly focused on the Alban Mountains, which one would have thought extinct since they were not active during recent history. Indeed, the last eruption dates back 41,000 years and ended 5,000 years later, the last of a long series having begun 600,000 years ago. The Alban Mountains today represent the remains of the stratovolcano at the origin of multiple eruptions, since a series of explosions had created different calderas.

According to a study published in July 2016 in the journal Geophysical Research Letters, beware of a volcano that seems to be dormant, especially when it is close to a city. According to the Italian and American researchers, it seems obvious to assess the risks in order to develop possible emergency plans, but this implies having knowledge of the volcanic processes currently underway as well as the volcanic history of the region. region, in order to concretely estimate the average frequency of eruptions.

“There is a clear convergence of independent evidence that suggests the start of a new volcanic cycle, which could lead to eruptive unrest likely to affect the Rome region” can we read in the publication.

In order to understand the situation, the researchers worked on two lines of research. They first took samples and analyzed rocks in order to understand the rhythm of eruptions over the most recent period of activity (last 100 millennia). Then, the topographic data recorded between 1993 and 2010 by three satellites (ERS-1 and 2, and Envisat) were also analyzed.

Rock dating shows that the Alban Mountains area erupted every 31,000 years on average, while the last volcanic activity ended 36,000 years ago. This means that the system is lagging behind but the current delay seems to be coming to an end.

“It’s like when you bake a cake and a bubble develops in that cake. At some point you can see that the crust on the surface will crack” explains geologist Alberto Malinverno from Columbia University (USA).

Satellite data, meanwhile, shows that the region is « inflating », showing an elevation of 2 millimeters per year in various places corresponding to the latest eruptions. Other research has shown that the Alban Mountains would have risen 50 meters in 200,000 years, a phenomenon that would occur because of the presence of magma under the ground. However, the next cataclysm should still be long overdue, because according to Fabrizio Marra of the Italian Institute of Geophysics and Volcanology:

“It is important to say that there are currently no signs that an eruption could occur soon. Such an event is very unlikely for at least 1,000 to 2,000 years. »