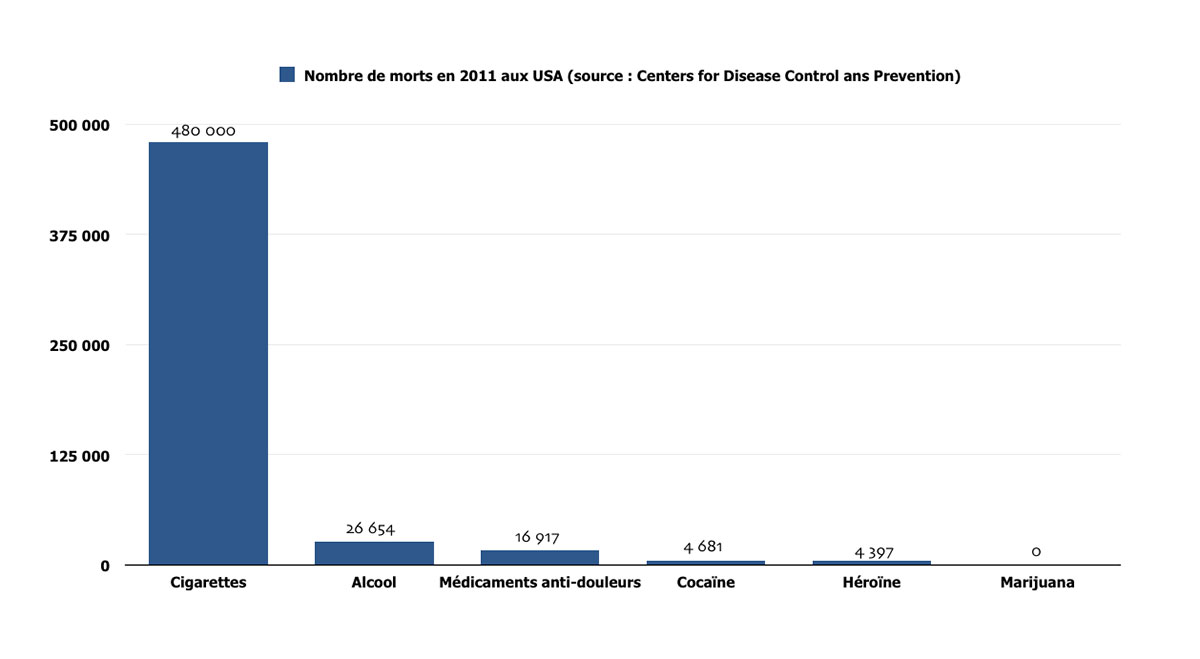 We are aware that all drugs are dangerous for our body, but as incredible as it may seem, those that do the most damage to humans are available over the counter. Alcohol, tobacco and painkillers are all three of the deadliest drugs. Their excessive consumption causes an addiction that can lead to death.

In France, the debate around the decriminalization of cannabis is a debate regularly brought to the forefront of the political scene. The consumption of this substance is controversial by the various studies conducted to date. However, it is interesting to note that the most deadly drugs are those sold over the counter, known as “legal”. In the United States, alcohol, tobacco and painkillers are the number one cause of death, far more than any other drug.

The graph below is the result of a study conducted by the Center for the Prevention of Disease Control in 2011. It concerns only the USA.

However, it is important to remember that these drugs are easy to access because they are freely available, while other so-called illegal drugs could cause much more damage if they were legalized. This graph shows the figures directly related to direct consumption and not to car accidents or homicides related to their consumption.

A national figure: Each year, tobacco kills 73,000 people in France (estimate by Catherine Hill, director of the cancer epidemiology department at the Gustave-Roussy Institute). A smoker will live on average 20 to 25 years less than a non-smoker.

The diseases it causes: cancer of the lung, mouth, larynx, throat, kidney, bladder, breast, stomach and small intestine. The risk of cardiovascular disease increases when you are a smoker.

In recent years, anti-tobacco laws have been increasingly restrictive and are causing tobacco sales to fall. For example, in 2006, a decree was signed to prohibit smoking in places of collective use.

After tobacco, alcohol is the second cause of preventable death in France. In 2009, 49,000 people drowned in the dark abysses of alcohol. We complete this figure by revealing that 40% of the deceased were under 65 years old.

Be aware that alcoholism also has significant repercussions on those around you and on society. Alcohol is the drug that represents the most danger for others: family crises, injuries, murders…

The graph below is the result of a study carried out in the UK by the Independent Scientific Committee on Medicines.

Often taken as self-medication or on prescription, analgesics have become a real drug for many people. Their consumption leads to a 40 to 70% increase in heart problems. Some medications contain opioid (synthetic derivative of opium), which can lead to strong dependence. In 2008, more than a third of emergency department visits were due to non-medical painkillers in the United States. Following this damning figure, a study found that taking cannabis for medical purposes in states that allowed it greatly reduced the use of painkillers.

The various governments around us highlight their fight against drug use, but their reasons are very often electoral! The media and governments give a narrow vision of drugs and seek at all costs to eradicate them. However, many studies show that free access and legal drugs would be much more dangerous and harmful for humans.