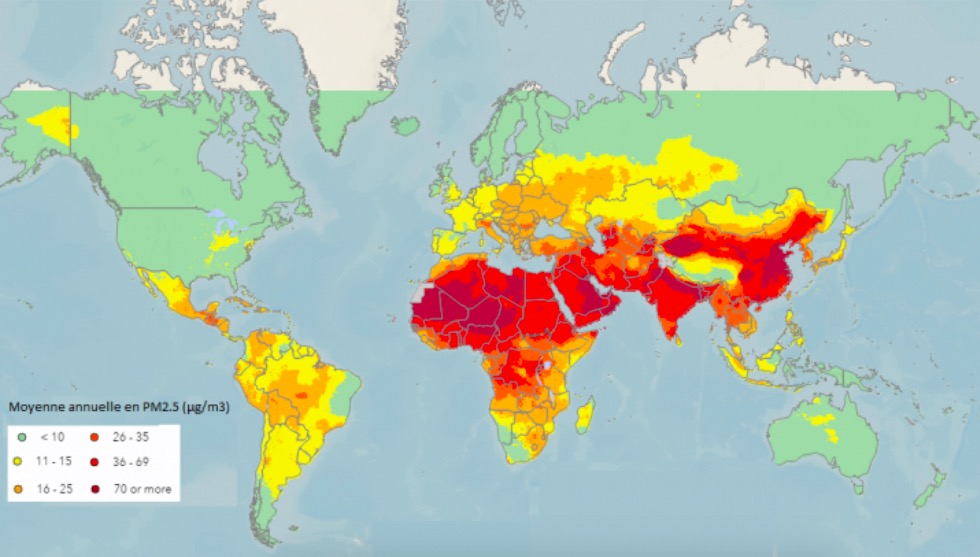 We know that air pollution is a big public health problem, particularly affecting babies and the elderly. The World Health Organization has created an interactive map with which it is possible to check the most polluted and healthiest areas of our planet.

Just a year ago, we mentioned another interactive map, the World Air Quality Index, a social project started in 2007, wishing to communicate and raise awareness about air pollution by gathering global data. The latter shows measurements of air quality at very specific points on the globe.

The map we are talking about today is the result of collaboration between the Global Health Observatory and the World Health Organization. This features complete areas in six different shades of color ranging from green (virtually pure air) to burgundy red (ultra polluted air). Thus, it is possible to have a better vision of the pollution whether in a global or more localized way.

This map unfortunately shows that nearly 80% of humans breathe poor quality air. Another alarming figure: 98% of cities in low-income (or middle) countries do not meet the global air pollution standards set by the UN at all.

Obviously, the areas where the air seems to be the healthiest are outside the big cities and in certain countries where the population is not very dense. It is possible to cite Canada, a large part of the United States and Australia, as well as Scandinavia, Siberia, the Himalayas, Patagonia or even the northeast of Brazil and the east of Indonesia (+ Papua New Guinea).

Air quality influences the state of health of vulnerable people, and can be the cause of many diseases such as lung cancer. Here are some very telling screenshots: