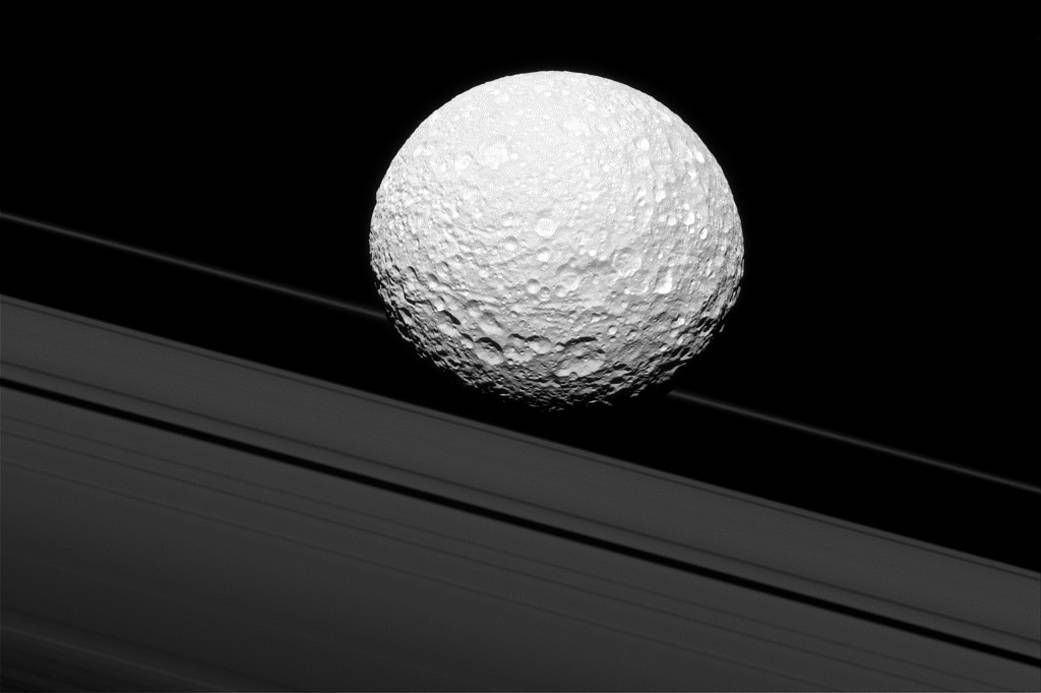 As the Cassini space probe continues on its way to Saturn’s rings, it took the opportunity to take a magnificent shot of Mimas, one of Saturn’s moons. A photograph that also offers us a beautiful optical effect.

The Cassini probe created by NASA’s Jet Propulsion Laboratory (JPL) in collaboration with the European Space Agency has been at the heart of the Saturn system for a dozen years and continues its  » Cassini’sRing Grazing Orbits « . This is the first phase of his last mission called  » Grand Final « . Various dives into Saturn’s rings are then planned before finally plunging into the planet’s atmosphere on September 15, 2017 where the probe will burn up.

On October 23, while still approaching a little closer to the rings of Saturn, the probe took the opportunity to capture a superb shot of Mimas, a moon of Saturn 398 kilometers in diameter. In this photograph, it appears that Mimas is on its way to collide with Saturn’s rings, but as NASA officials explain, this is an optical effect.

The small moon is indeed located about 45,000 kilometers away from the gas giant.  » However, it is true that there is a close connection between the icy moon and the rings of Saturn. “Explain NASA officials relayed by Space magazine.  » Gravity binds them and shapes the way they move « . With gravity, Mimas creates ripples in Saturn’s rings. This disturbance separates rings A and B, an event which is called the  » division of cassini « .

As it begins its last mission in the Saturn system, the Cassini space probe has done considerable work for the knowledge of the gas giant. As a reminder, since his arrival in 2004 and after seven years of travel, Cassini has been: 10 moons discovered, 3,616 scientific publications, 243 orbits, 379,300 photos or even 2.2 billion km traveled since his arrival!