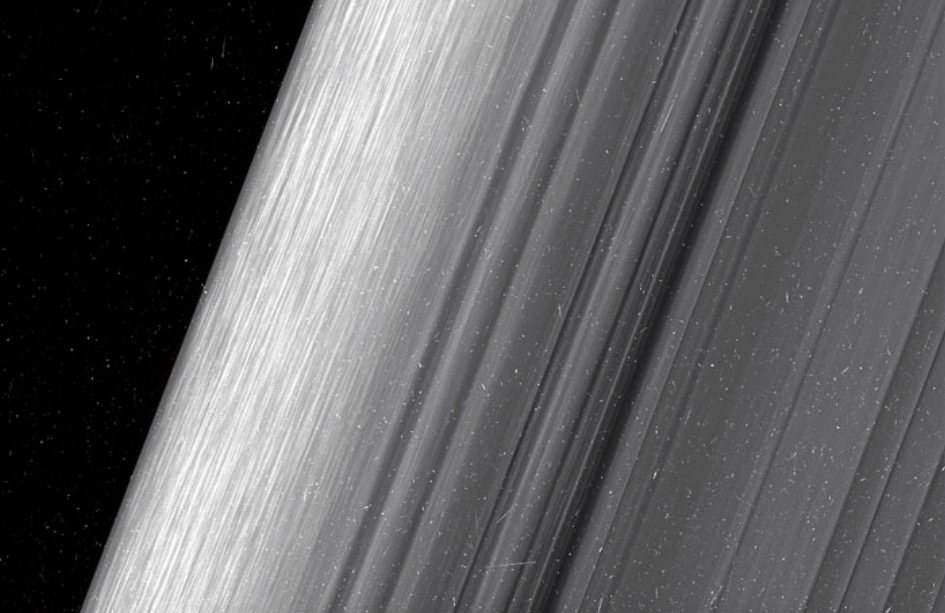 In a last burst of generosity before the final dive, the Cassini spacecraft is delivering some of the closest and most breathtaking photos ever taken of Saturn’s icy rings, revealing unprecedented levels of detail.

After twelve years of good and loyal service, the Cassini probe recently began the first phase of a mission that will be its last. Until April 22, the Cassini space probe will perform a series of twenty dives in the icy rings of Saturn, the goal being above all to sample particles and gases, but NASA intends to take advantage of it by strafing everything she will be able to. On December 4, Cassini began with never-before-seen images of Saturn’s North Pole, revealing a strange hexagon observed in its atmosphere. A few days ago, other shots reached us with in particular this close portrait of Pandora and Daphnis, two moons of the gas giant. Today, Cassini gives us unprecedented details of one of the outermost rings, located about 134,500 km from its host.

We had never had the opportunity to observe the main rings (the brightest) with such definition. These new plans show us structures as small as 550 meters, about the size of some of the largest buildings on Earth. The image below reveals the outermost ring of large light structures (ring F):

To give you an idea of ​​the feat, Cassini’s orbits take it so close to the ring that small particles hit the probe as it passes: They are very small and fragile, only a few microns in size, like dust particles you would see in sunlight explained Linda Spilker of the Cassini project during an event broadcast live on Facebook this week.  » We can actually « hear » them hitting the spacecraft in our data, but these particles are so small they’ll never harm Cassini. « .

The probe had already ventured this close to the planet about thirteen years ago, but the quality of the images was not as good. Cassini was moving very fast, and the researchers had to go for very fast exposures to help minimize blur. These latter shots were captured with longer exposures, resulting in clearer and more detailed images.

The end of the mission is scheduled for April 22, when Cassini will then continue its « Grand Finale » to finally dive into the planet’s atmosphere on September 15. This is where it will burn up like a meteorite transmitting data until its very end.