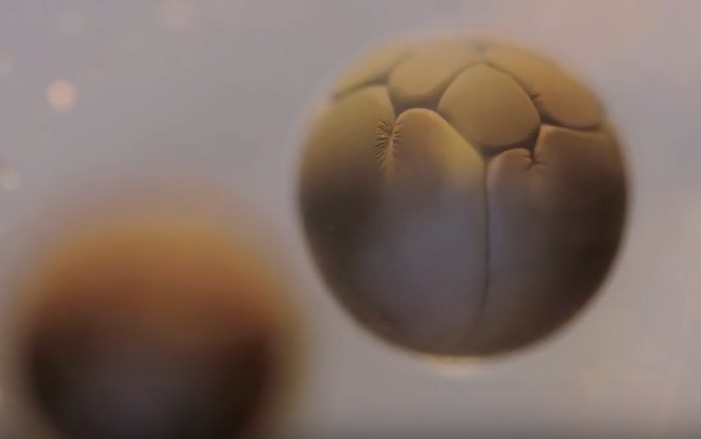 Have you ever wondered what the phenomenon of cell division looks like? Nature in all its work. No ? The images below, filmed in time-lapse using a microscope, show us the development of the very first hours of a frog’s egg and it’s rather spectacular.

The process normally takes over thirty hours (33 hours to be exact), but here it’s compressed, sped up to you in a video of just 24 seconds. It shows a common frog (Rana temporaria) egg cell created from a female reproductive cell and a male cell. Then this “egg” will first divide into two, then into four, then into eight, then into sixteen until it becomes an embryo millions of divisions later. Note that the size (volume and mass) of the embryo does not change as it divides. A few days later, a tadpole will naturally emerge from this egg.

Francis Chee, the origin of these images, claims to have used a telescope made especially for the occasion, all placed on an anti-vibration table. The filmmaker also used LED to illuminate the frog embryo, but d‘countless other variables are involved in theexecution of this delicate plan and, it must be said, quite exceptional, including the consideration of the ambient temperature, the egg collection time, how the eggs were handled, etc…. And here’s the result :

If your SVT lessons escape you, note that cell division is the basis of the functioning and reproduction of living things. There are two types: mitosis and meiosis. Here’s something to refresh your memory. Let’s start with mitosis:

And finally, let’s finish with meiosis, thanks to this excellent SVT course: