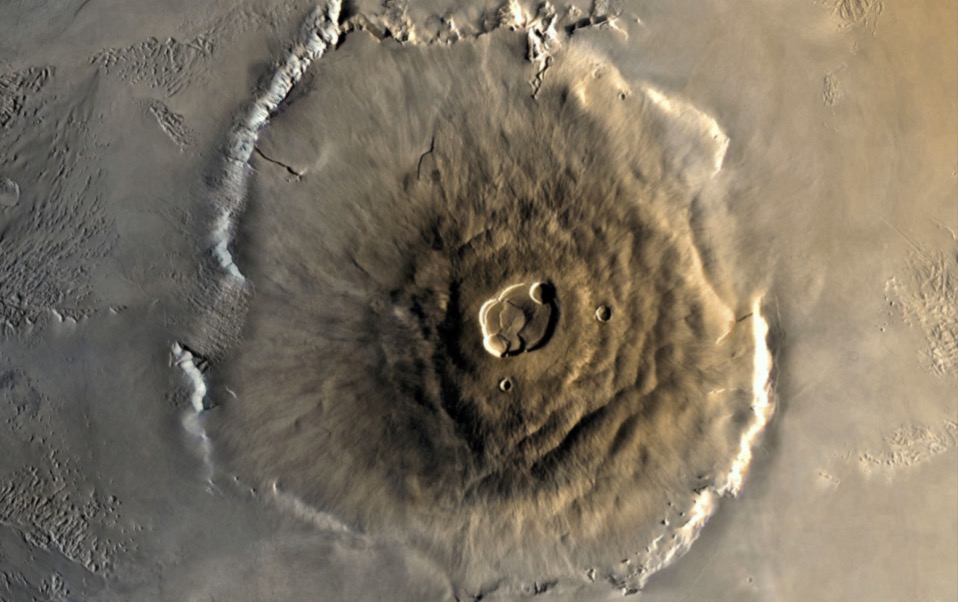 Analysis of a meteorite found in 2012 in Algeria suggests that Olympus Mons, now considered the largest volcano in the Solar System, would have erupted in its history for at least two billion years. Unheard of on Earth.

It is the largest volcano in the solar system: with its 27 kilometers high and 650 kilometers in diameter, Olympus Mons (Mount Olympus) is undoubtedly a giant in all categories. It would seem that another record has just been established: that of the length in terms of period of activity. A small meteorite (small enough to fit in the palm of your hand) found in Algeria in 2012 and recently analyzed suggests that Mount Olympus erupted in its history for at least 2 billion years. The results of the study conducted by researchers at Purdue University in the United States have been published in the journal Science Advance.

The analysis of the rock called NWA 7635 will have made it possible to date it: it is approximately 2.4 billion years old. This is surprising since of the 100 meteorites identified to date as coming from Mars, about ten belong to the same group as NWA 7635 and all have been dated at around 500 million years. This group of meteorites, including NWA 7635, have all been exposed to cosmic rays for about 1.1 million years, but the dating gap between NWA 7635 and the other 10 suggests an uninterrupted eruption period of about 2 billions of years.

» We’ve never seen this on earth “Explains in a press release Marc Caffee, professor of physics and astronomy at Purdue University and member of the research team.  » Our results suggest that for about 2 billion years there has been some sort of continuous plume of magma targeted at a single location on the Martian surface. ».

There is no more plate tectonics on Mars to create, as was the case a long time ago, volcanic alignments like those observed on Earth. Mars cooled, the molten rock beneath the plates solidified, and tectonic plate formation has since stalled. While on our planet the sliding of the lithospheric plate above the magma chamber is at the origin of the volcanic chains, on Mars all the lava present under the surface has escaped at specific places on several occasions, where the volcanic configuration observed today.

Astronauts have never set foot on Mars so far, but thanks to these meteorites, we can still study the surface of the red planet. Due to its low gravitational force and thin atmosphere, rock fragments are easily released. However, these fragments do not head directly for Earth. Instead, they orbit in space for hundreds of thousands of years. In the event of shocks, some are then deflected towards the Earth. In other words, these little meteorites had a long, long journey before they got here. But it was worth it.