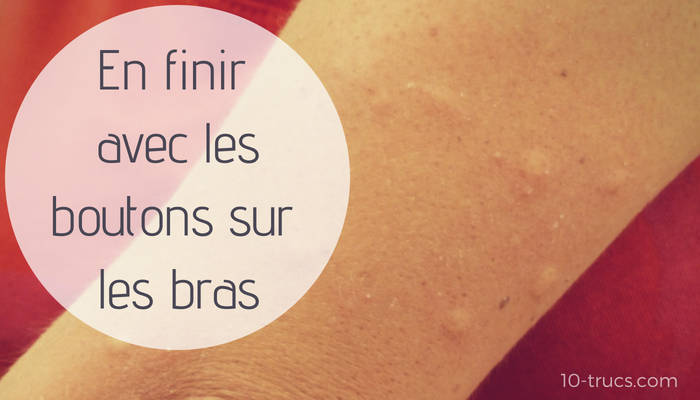 How to get rid of pimples on arms?

There are several causes for pimples appearing on arms: acne, keratosis pilaris, as well as infected hair follicles or clogged pores. The appearance of these unsightly pimples can be embarrassing for many, but fortunately, there are ways to eliminate them. Here are some tips to get rid of pimples on your arms.

Tips and tricks for pimples on arms:

What causes pimples on arms?

Wash your arms with a mild soap:

While they cannot completely prevent or cure the condition, some methods can reduce the size and longevity of pimples. Some doctors suggest washing your arms twice a day with mild soap and warm water, but avoid rubbing as this can make the condition worse.

Over-the-counter products that contain benzoyl peroxide may also help. Benzoyl peroxide is an antibacterial that sloughs off dead skin cells, reducing the chances of blockages. However, this ingredient can lead to dry skin problem.

Also avoid pinching your pimples, as this can worsen your condition and create a permanent scar on the surface of the skin of the arms, but also on the face, back and elsewhere on the body.

Keratosis pilaris is not a serious condition and usually goes away in adulthood. However, some treatments can help reduce your symptoms. Make sure your skin doesn’t get too dry by taking warm rather than very hot baths and showers. Gentle exfoliation can help, as well as using a lotion containing salicylic acid, which removes dead skin cells.

As dry skin can make the problem worse, be sure to moisturize your skin well after bathing or showering. Coconut oil is a great option as it can also help diminish the appearance of pimples caused by keratosis pilaris. Besides being hydrating, coconut oil has anti-inflammatory and itch-relieving properties.

The usual treatment consists of taking antibiotics if it is of bacterial origin, or antifungals if it is caused by a fungus. If you prefer a drug-free approach, you could try washing the affected area twice a day with antibacterial soap. Avoid rubbing too hard, and just as gently pat dry. Warm, moist compresses can also help reduce inflammation.

In order to prevent folliculitis, friction with clothing and the formation of ingrown hairs should be avoided as much as possible by exfoliating the skin of the arms regularly, moisturizing it well and being careful to shave in the direction of the hair growth if you do. are a follower. Above all, avoid bursting the pustules! This could make the infection worse.

How to remove pimples on the legs? In addition to having pimples on your arms, do you also have them on your legs and thighs? Here are our tips for quickly making pimples disappear on the legs.