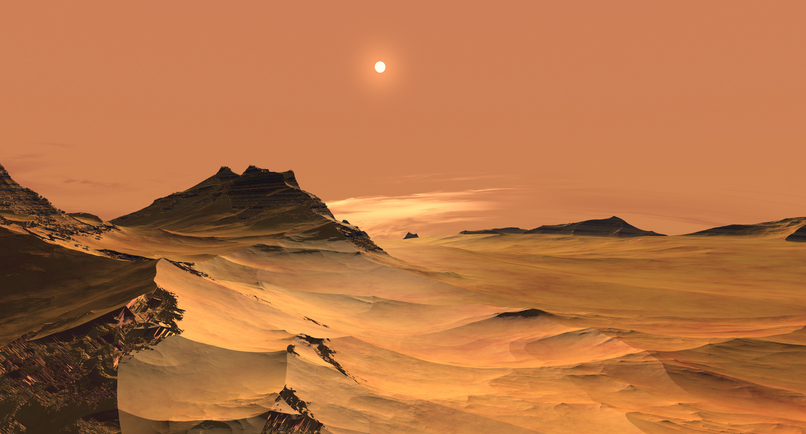 How did Mars die? A recent study reveals that more than half of the Martian atmosphere would have evaporated into space, triggering a phenomenon of desertification.

Mars today is just a barren and probably lifeless land. The planet owes its pretty ocher color to its very thin atmosphere. But this was not always the case. It was once a hot, humid planet capable of supporting life. But then, who should we blame? The Maven probe launched in 2013 by NASA is responsible for studying the thin Martian atmosphere. The instrument, with a wingspan of 2.30 meters and weighing 809 kilos, plays its detective role very seriously, delivering its second burst of atmospheric readings in nearly four years. It confirms that since its creation, Mars has lost most of its atmosphere (which was then as thick as that of the Earth) under the effect of the solar wind.

So the solar wind and radiation are to blame. Stripped of its protective layer about 3 billion years ago, Mars then dried up and cooled, the seas and rivers disappeared leaving only a cold and dry landscape. But the Sun is obviously not done with Mars yet. About 65% of the argon that was once present in the Martian atmosphere has since been removed, of course, but the measurements carried out in 2015 by Maven’s instruments have indeed shown that Mars is still losing 100 grams of gas per second.

Today only a fine atmosphere on Mars resists, composed largely of carbon dioxide (CO2), which constitutes 95.3% of it, whereas on earth there is less than 1%. This is why the air is unbreathable on the red planet. The rest is a mixture of other gases, including nitrogen (2.7%, compared to 78% of Earth’s air) and oxygen (0.13% compared to 21% on Earth). Water vapor, which makes up 1% of Earth’s atmosphere, makes up just 0.03% of Mars’ atmosphere.

Mars uninhabitable therefore, but is it definitive? A team of NASA researchers recently proposed an ambitious plan to make the Red Planet habitable for future generations of human settlers. Its atmosphere was in fact gradually dispersed in space because of the solar winds, in particular because Mars does not have magnetic protection, unlike the Earth, which was spared.

To make the planet Mars habitable, many changes are necessary, but two main transformations are necessary, namely the reconstruction of the atmosphere and the raising of the temperature. Concisely, what is commonly called “terraforming” consists in modifying the natural characteristics of a planet (here Mars) so as to make it as identical as possible to the Earth.

To do this, researchers aim to launch a giant magnetic shield into space to protect Mars from solar winds and which will subsequently restore the atmosphere of the red planet and allow liquid water to flow again on the surface. .