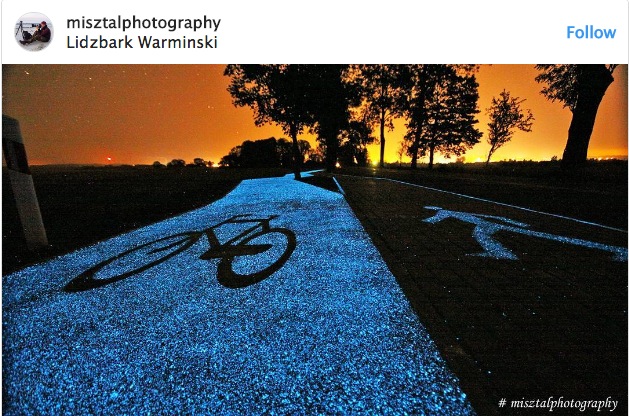 The company gradually integrates environmental problems and sometimes mobilizes, aware that these abuses are partly the result of private transport. Last example to date: in Poland, the bicycle is becoming more democratic, while a novelty has just appeared there, an autonomous cycle path with regard to its night lighting!

Using a bicycle rather than a car for daily trips appears to be an eco-responsible gesture. However, not having headlights, the bike can be dangerous when night falls, although small lamps exist but do not illuminate enough to hope to enjoy good visibility. Public lighting, with regard to cycle paths, would be too expensive to install to cover all of these lanes, especially since using energy, when few people are cycling at night, is highly contradictory. .

The Polish city of Lidzbark Warminski has found a reliable solution, in addition to being original. It is a cycle path with a special coating, a paintwork incorporating phosphor materials. The principle is simple: these materials absorb sunlight, which they then release during the night. Lidzbark Warminski’s first-ever track has just opened to the public, with the rest of the network expected to follow.

The innovation lies above all in the effective duration of the lighting, according to researchers from the Technological Research Institute (TPA), at the origin of the project:

“The material we used for the track diffuses light for more than ten hours. Which means the road can be lit all night, and store light again the next day. » says engineer Igor Ruttmar, for the Polish site Wyborcza.

This duration is more than enough to cover the duration of one night, regardless of the season. The only unknown is the lifespan of this phosphor coating, but if the costs are affordable, other cities may adopt such a measure in the future.